As I progressed in landscaping as a career – and especially in my own projects – I came to realize how vital “finishing” can be. As the business owner who had a “speak freely” attitude I promoted among my crews, I learned many things I would otherwise not have attempted or known without their input. Nor is this some false modesty – it is simply truth. The only thing I did right was listen.

Well, it came to pass that my crews could get pretty upset with my behavior during finishing – the last day or two on a project where the time seems to slow down and a business begins chewing into profit lines. As well as I may have insisted we perform installing things, my frustration always seemed to emerge just about now.

We’ve used fire hoses tied directly into fire hydrants, using 2-3″ hoses to blast large projects into cleanliness. Needless to say, the need for an excellent pressure washer is must-have for projects where brick dust, soil amendments, bark mulches, street dust and – Heaven forbid – oil stains from standing, dripping vehicles (including the machines used for the work, like Bobcats) -can produce stains of potentially disastrous impact. Brooms, fine rakes for bark mulch, snippers for the tags which always accompany plants and which – if left – reduce the entirety to a more amateur status, blowers, you name it, all of which seemed diabolical to someone with my level of ADD, ha ha.

But the real fact was, they were prescient. They were totally capable of leaving a project looking as perfect as it could look. Plus, I would get the call when we were done and drive over to assess it all. I could still set standards, even if I was awful at the work. So they basically kicked me off the jobs. And I’m serious. I was hard to live with. The reason I say it was a factor is because crews from 2 different eras and 2 different countries did the same thing. I am a mess at the end. Luckily for the crew, it was so obviously unsatisfying to me, they both recommended that I go to the next project and begin. The truth is, I am, having said all the above, a monster at starting things. This was pretty much always where I saved and made money. I could destroy stuff at a dizzying pace!!  😉

Add that I was a sole proprietor in effect, we then saw how the wisdom of moving along rapidly and seamlessly became a truism in how to handle the work. An early or prompt arrival gave me time for the ‘soul-to-souls’ I could have with clients, as well as ascertaining potential changes they may have conceived and wanted to talk over. It also allowed me to arrange deliveries for the future, from machinery to sub trade scheduling.

The picture below is somewhat typical of the crude beginnings of a project. This is about the third day of work on a large residential project in Reno. I have spirited away one guy to run the larger machine, separating out boulders by size as I played around with actually setting the rocks into soil. Meanwhile, the other guys were finishing a project elsewhere. 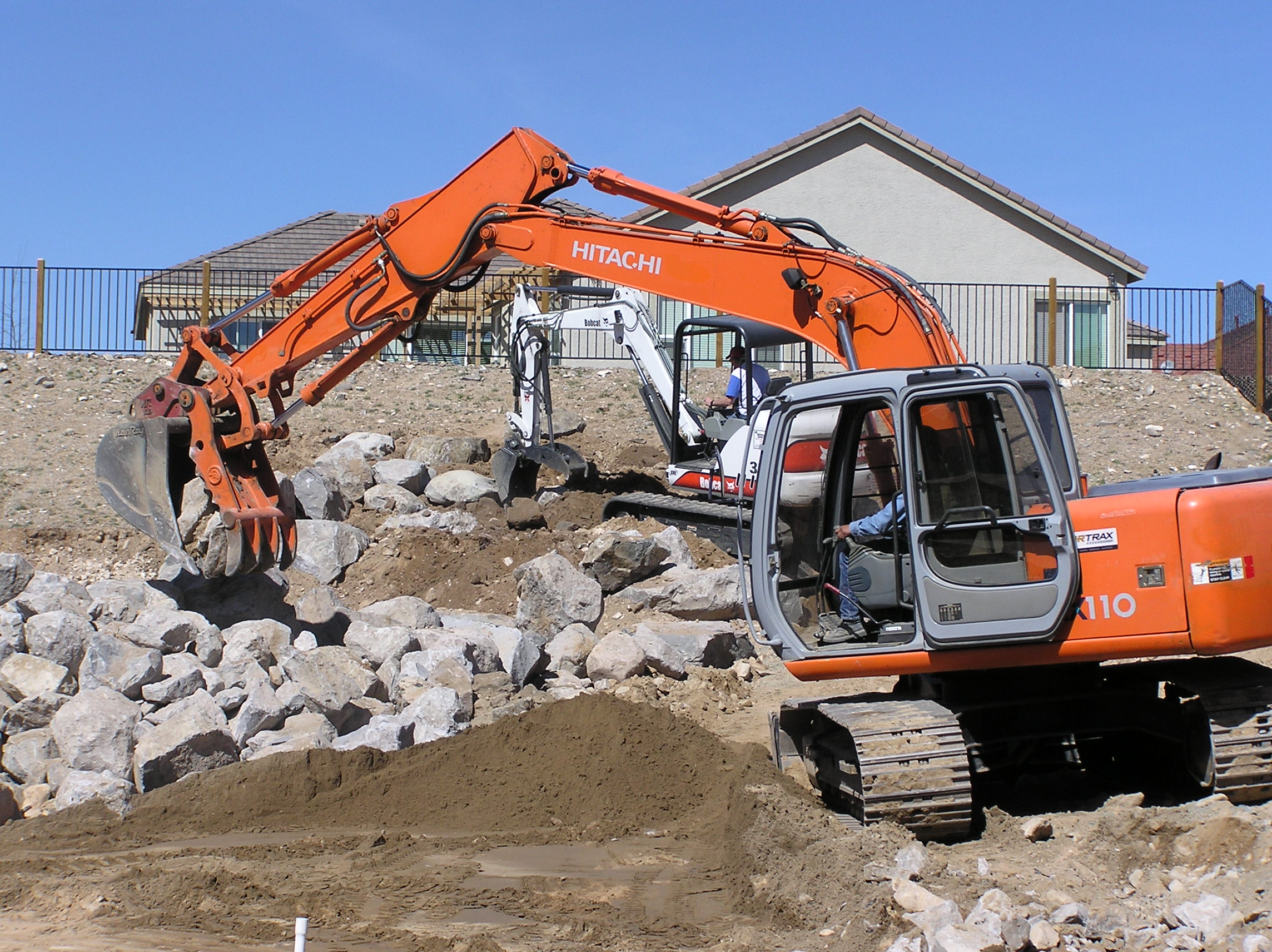 Eventually of course, the entire crew showed up and we were wholly underway, a glorious sensation to me as our attentions bent to newer projects. Soon, we would be doing the “mid project” Phase 2-3 work of final rock placement, irrigation and planting. 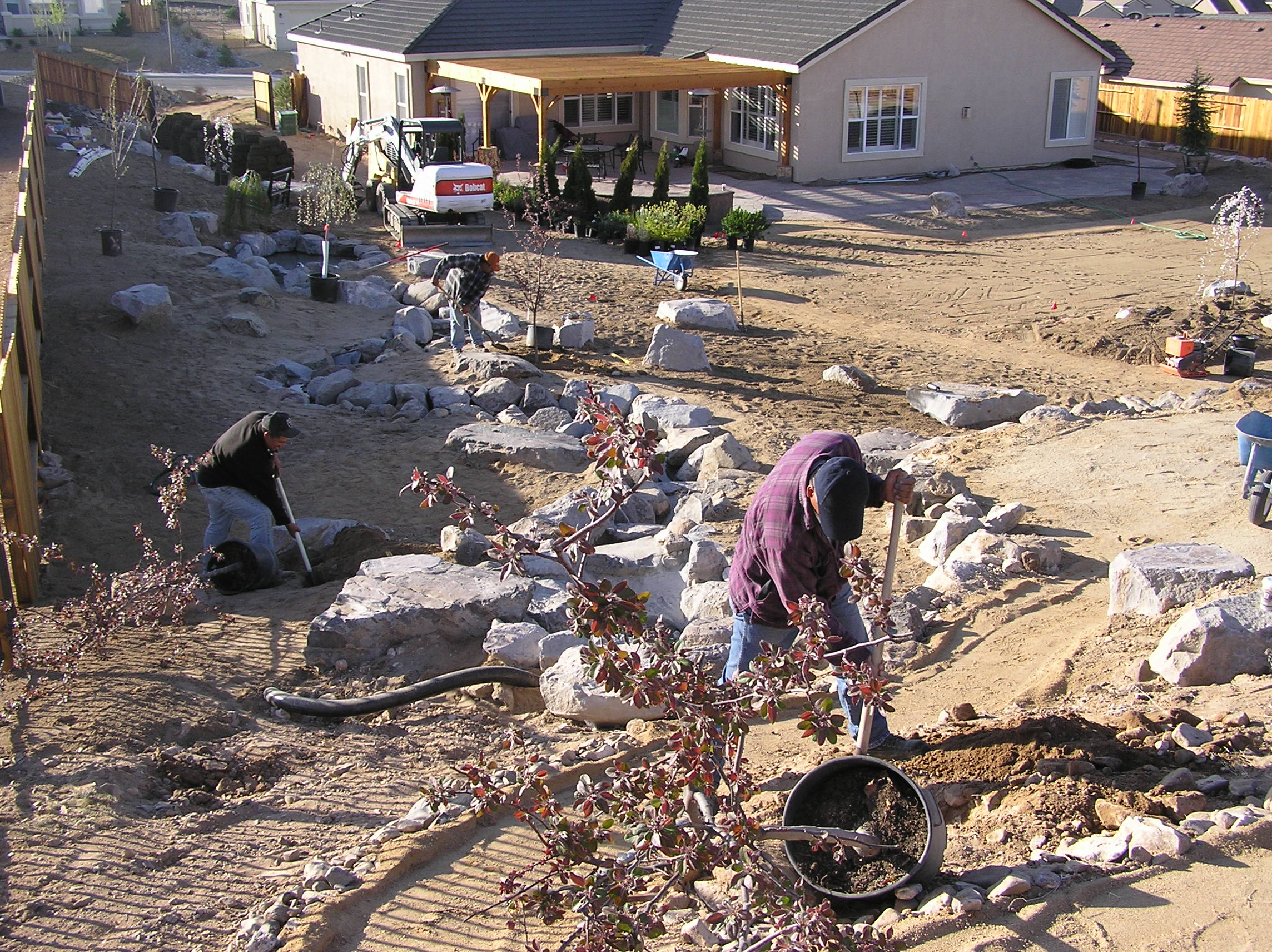 I would always collect the final check on a walk-through with owners, listening to any corrections they may have had from punch lists we both created and/or listening to them rave. The latter was always my favorite. 😉

Detail In The Work Itself

“The devil is in the details……..” .but so are some excellent angels.

Eventually, what I found was a profound sense of feeling well-served on the parts of clients who almost daily checked out our progress and who expressed the severest appreciation for how we handled details. I learned, for example, to actually work to produce details someone would admire. Rather than shy away from difficult aspects of projects, I learned to embrace them instead. For example, this rock grouping clustered around a gas-fed fire pit we designed and installed was never even spoken of during the original design consultation. I just went and thought it was too cool not to try. 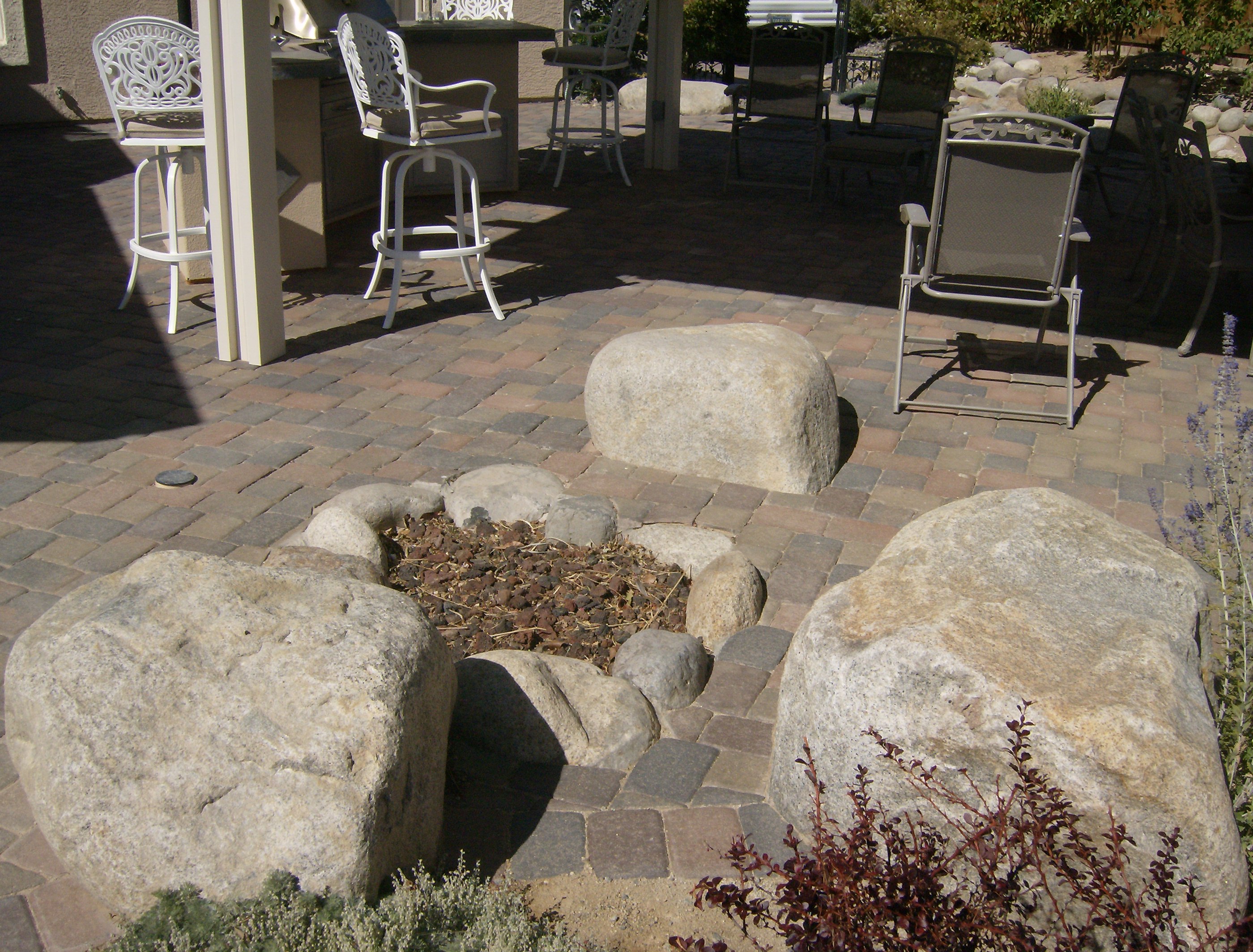 The “trick” here is the absolute snugness of the bricks which were custom cut to nestle in next to these boulders with zero tolerance for clearance. It made them look far more natural. (double click to get a better idea of how perfect I required the fit.) 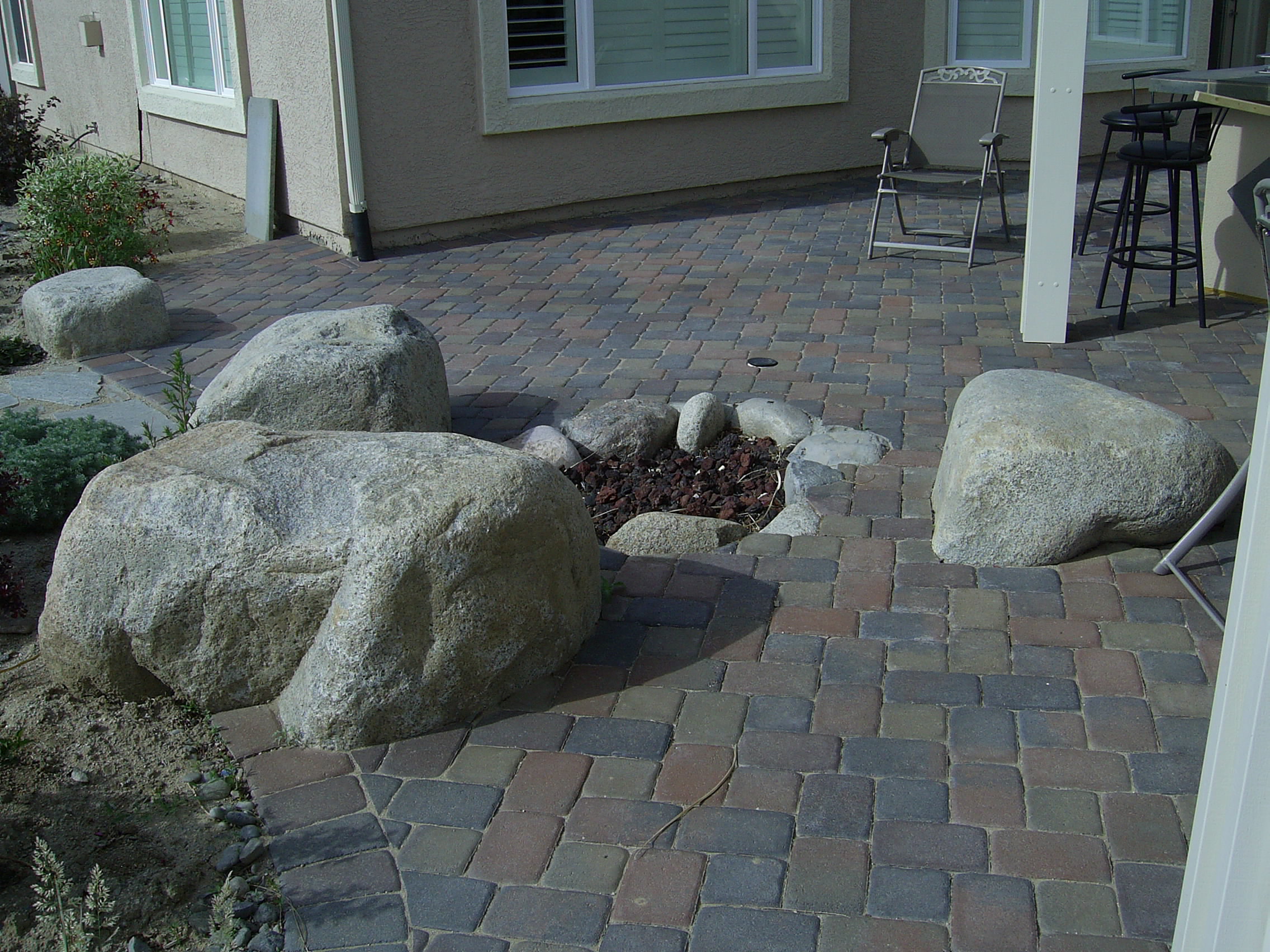 The owner later lamented he overspent on chaise lounges and bar seating in his back patio “because everyone wants to go sit on the dam rocks!” 😉 (He said it with a smile, let me add, lol). He learnbed how large boulders retain the heat from the sun for long hours into the njight and how nice that feels on a bum, lol.

Below is a picture 20 feet away from the fire pit, illustrating how I would use the same “snug” technique with boulders I would insert to break up boring and predictable lines on the outer edge of the patio. I always thought it gave a far more “lived-in” look and seemed incredibly more interesting if not natural. 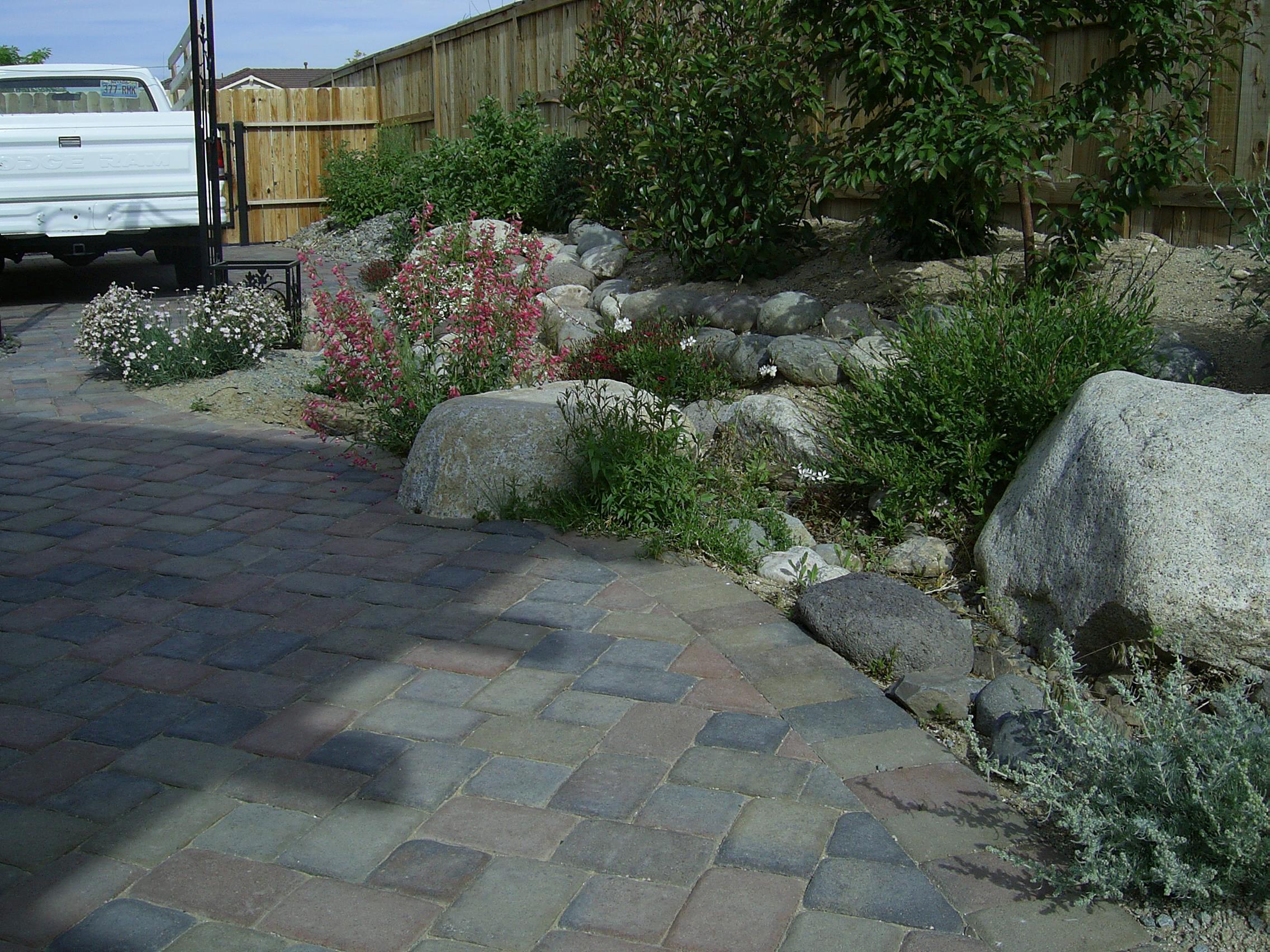 Here is the same patio, looking out at a small hill we created in order to supply the owner’s requested waterfall, creek and fish pond. 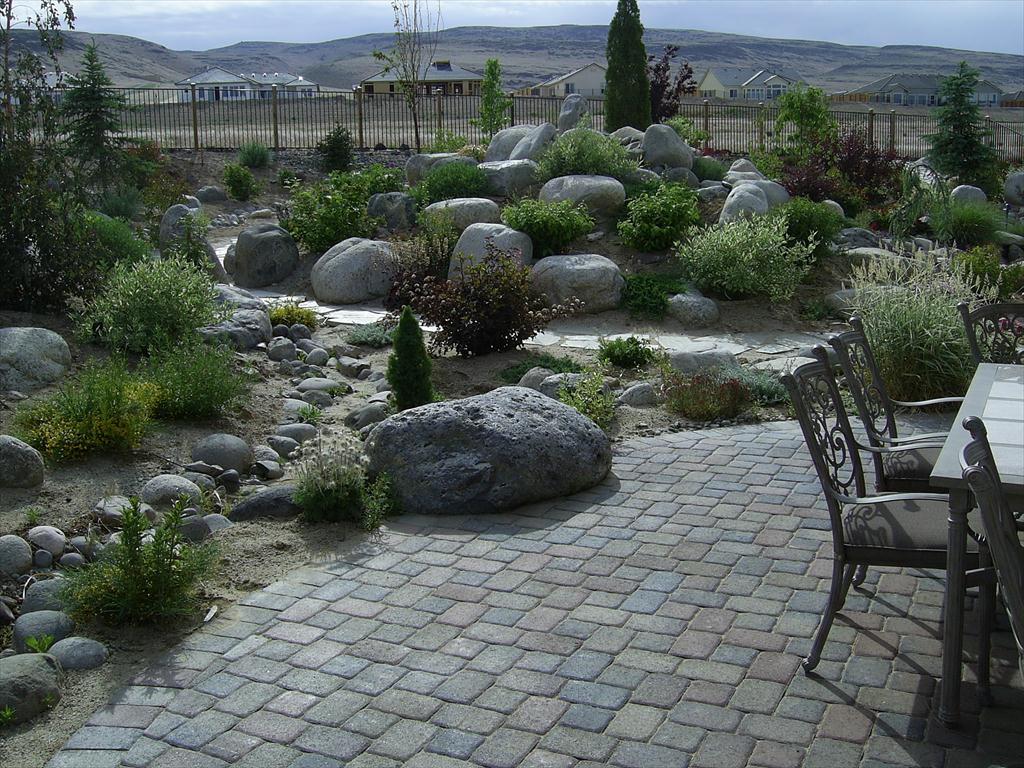 A view of the same project from a different angle, looking back……….. 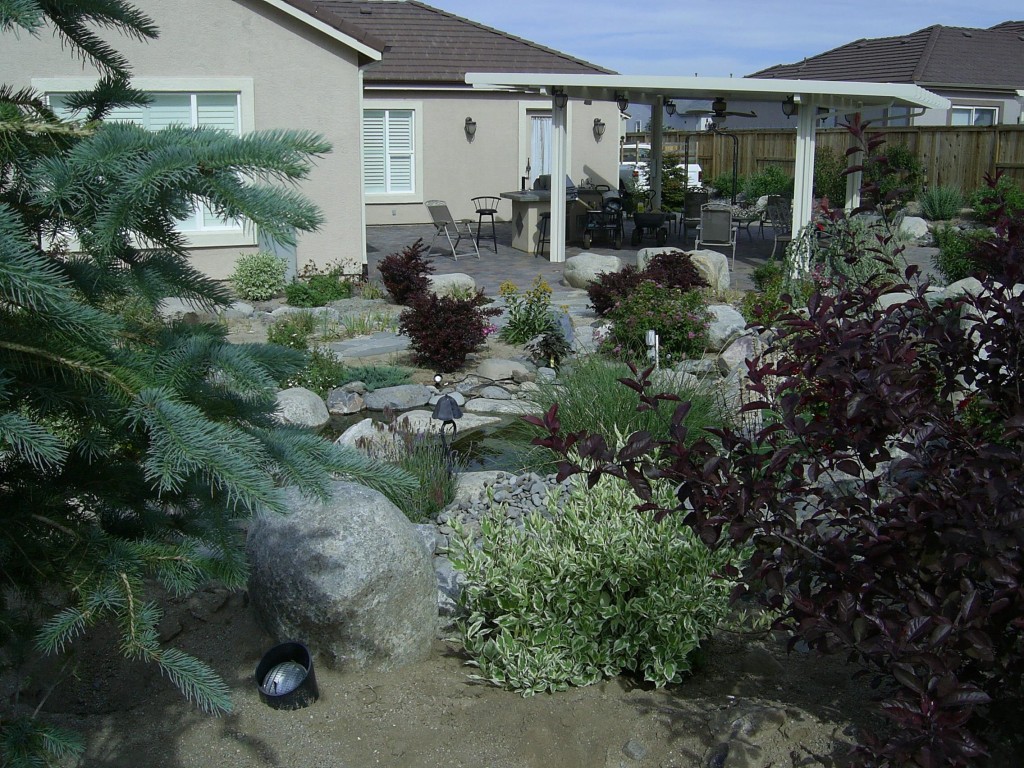 More detail, this time merely providing an interesting edge, snugging up nicely to the concrete border. 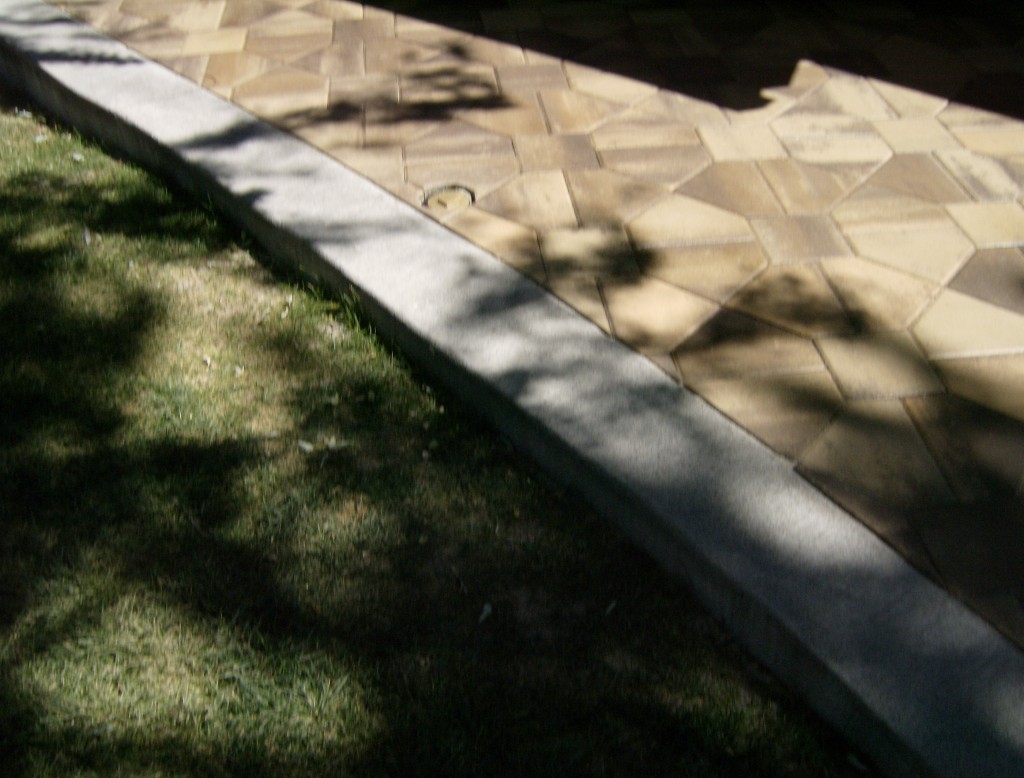 This entryway to a home – below – was a process of gluing bricks onto the existing very bare concrete left by the builders. Note, on enlargement, the circle pattern we cut and forced into the mix right at the door way itself. I wasn’t asked for this, either, but this detail proved a winning formula and honestly didn’t take too long to manufacture.

From the very front: 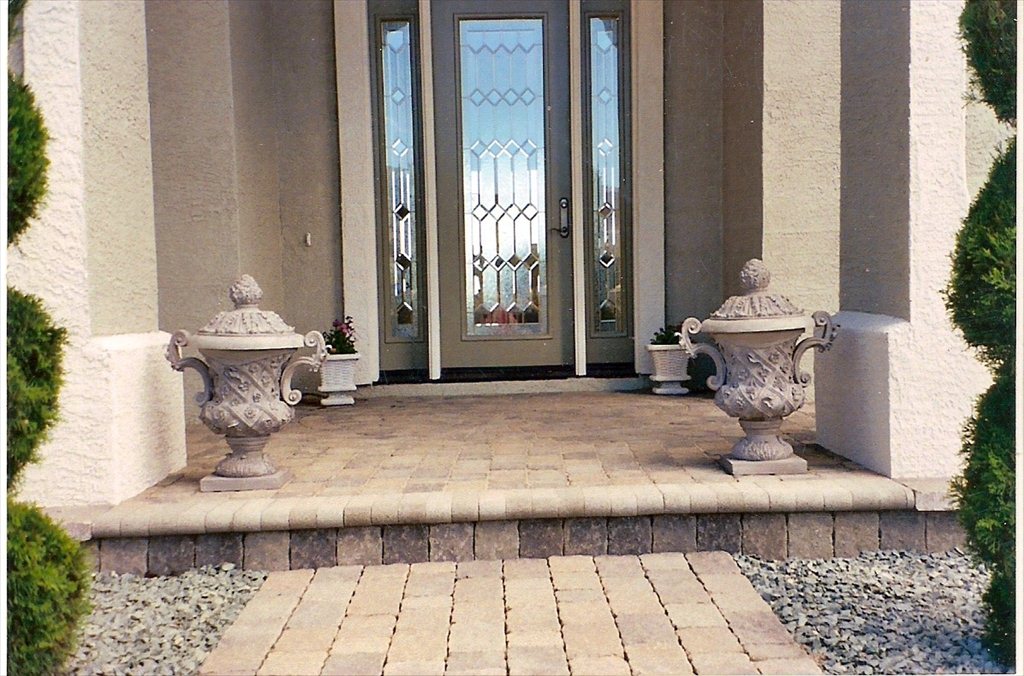 A better look, when enlarged, from the side. 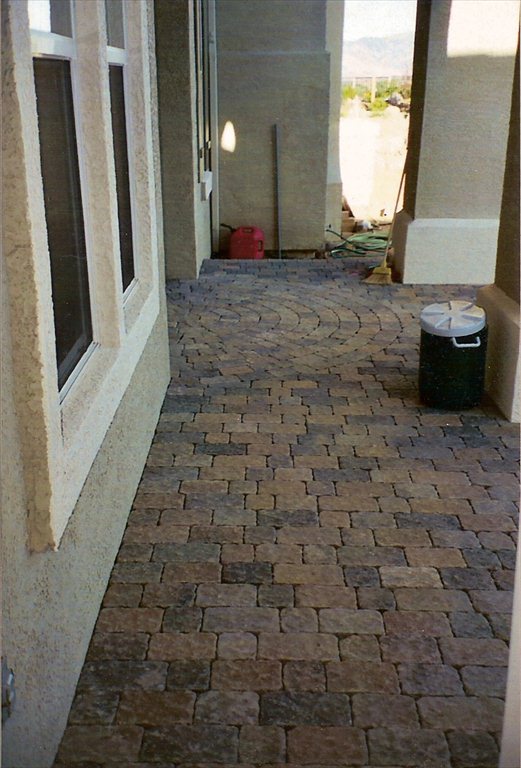 “Detail” also took place at the very end of jobs, during the cleanup I mentioned I was forced to avoid. 😉  (kicking and screaming………not). Below is the day of completion at the finishing touches around a small pond in the woods we created by falling trees, digging a hole, and trying to make it look as natural as possible. In the end, this is probably the best detailed finishing I ever saw. It looks like it’s been there forever. 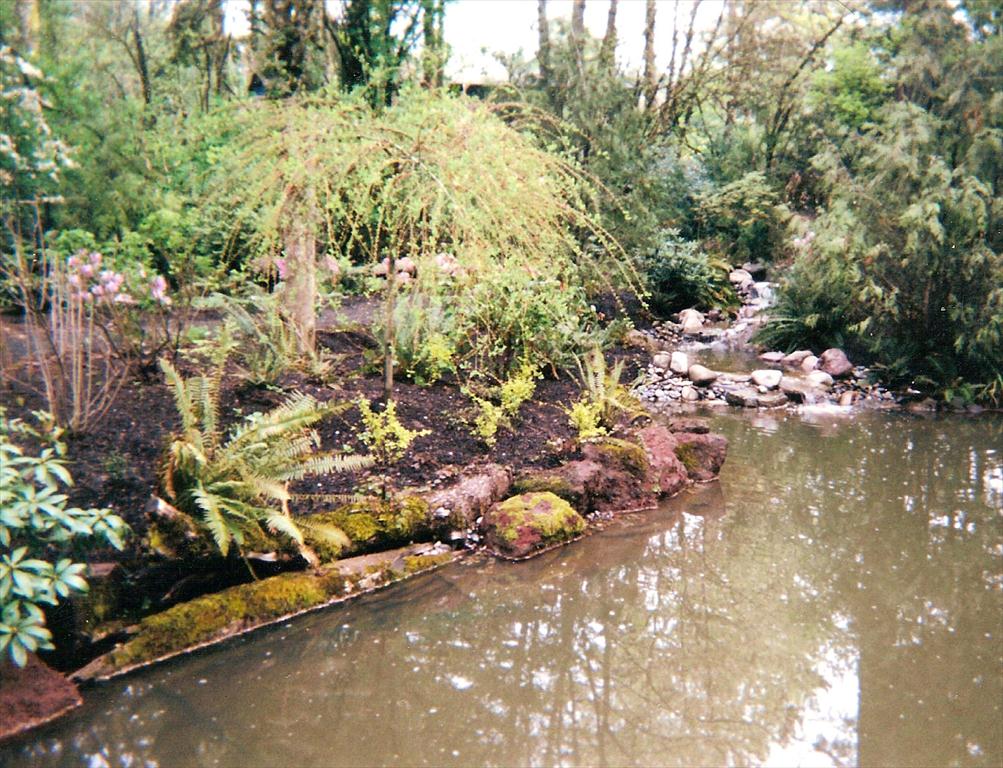 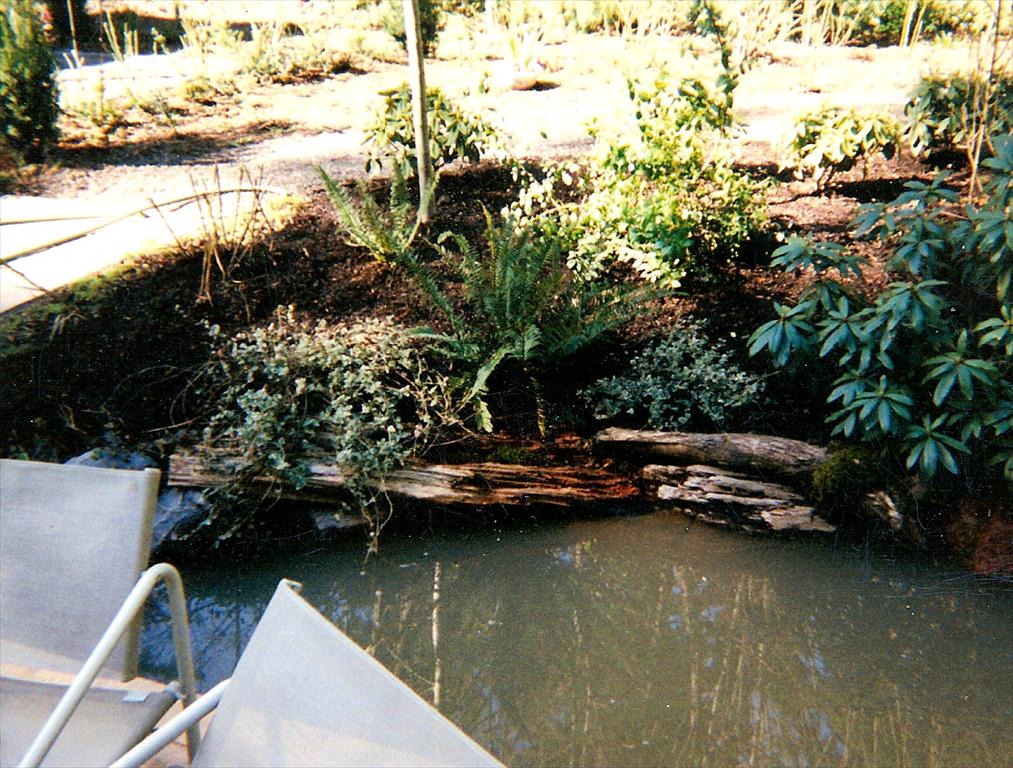 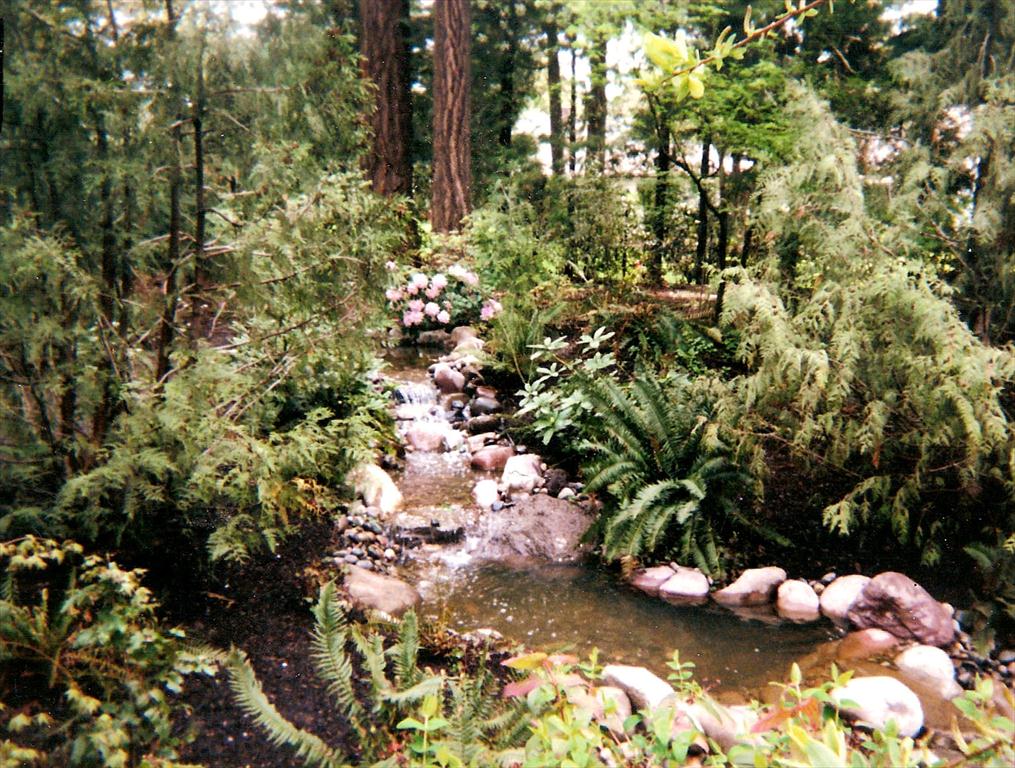 Inasmuch as most of our larger work looked something like the below about mid-way through, the “End” so often seemed so remote. Imagine all the work involved and then imagine not attending to the small stuff. 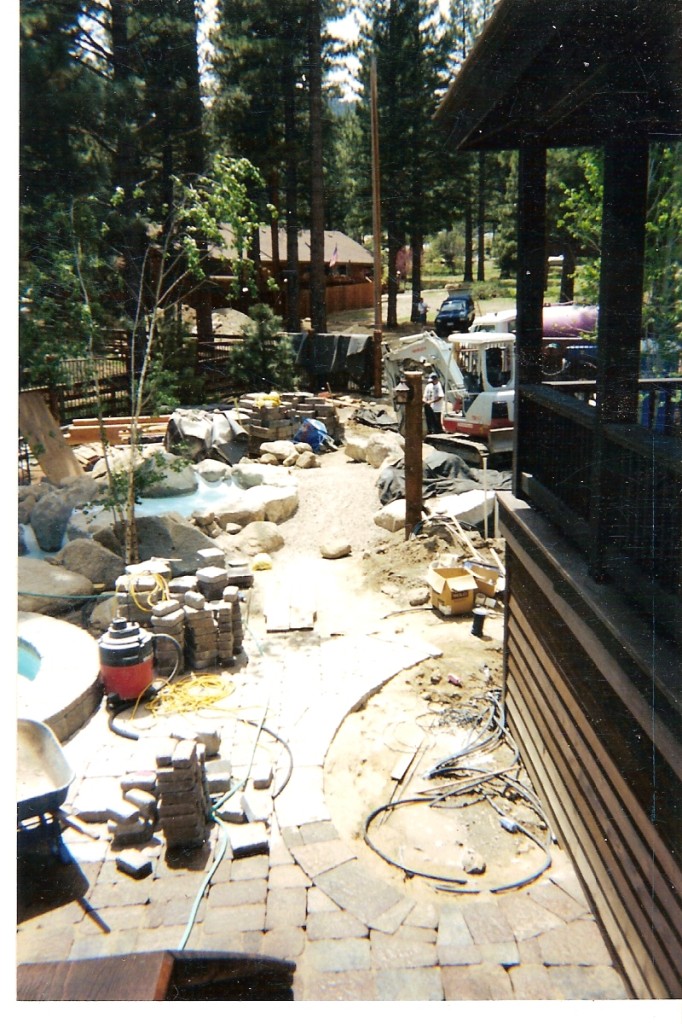 But rescue is at hand by some willing labor and the good vibes we always tried to support. 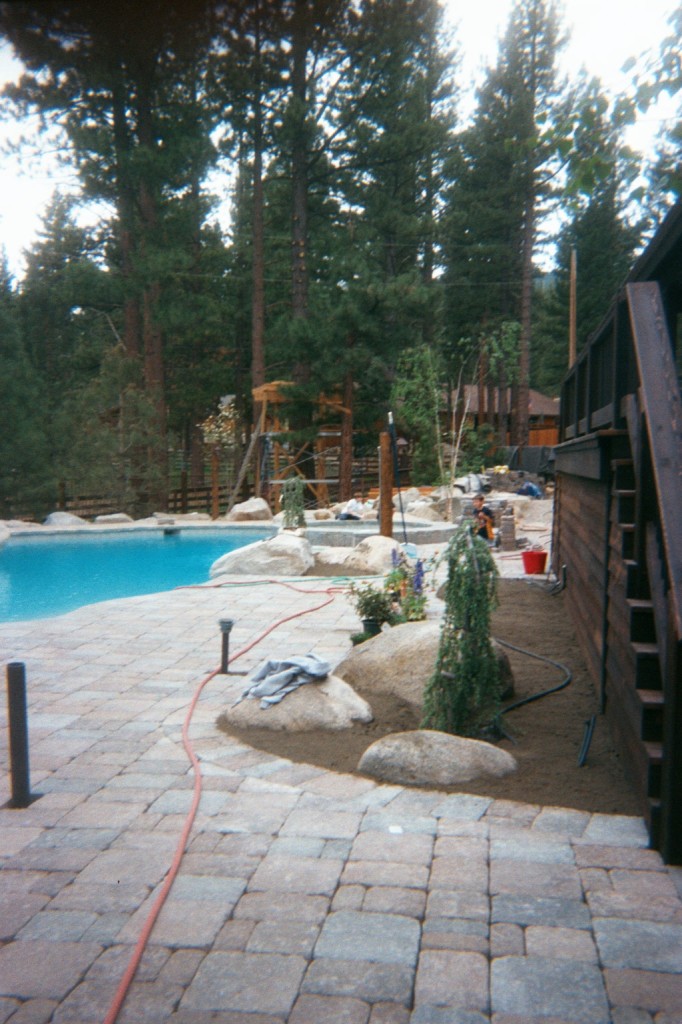 4 thoughts on “Details And Their Importance”