This is a trip through a less naturalistic and more man-made aspect of the Japanese Garden. That is not to say there is no Naturalism. Far from it. It is always that interplay, in fact, that seems to be evoked in any Japanese Garden and it is the gift they supply us as we walk through them. 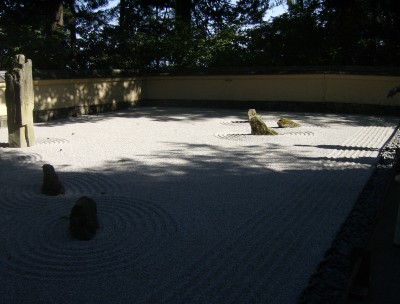 The trip around the Japanese Garden is a marvel of tightly-controlled randomness, a weird sort of dialectic speaking of the tension of Nature and man coexisting in a common theme – the enhancement of each. Man shows Nature off here. We see the incredible beauty of the Koi, colorful, gorgeous and sinewy, swimming lazily in still water ponds. 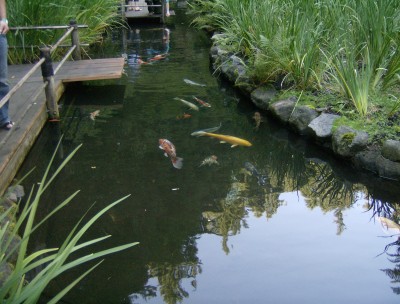 We look at the pruned wonder of a Japanese Black Pine tree, its branching looking wild and anarchistic, yet controlled somehow all the same, driven by man’s hand to display features which we once just potentials, now gorgeous like some work of art. 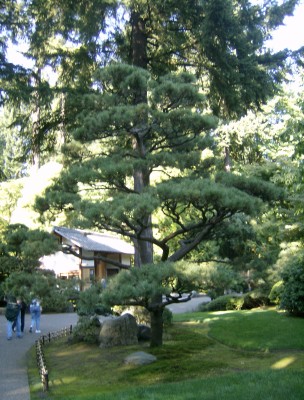 The natural wonders of the plants and animals all arranged in successive steps unfolding in front of us then yields to those constructions which are even more challenging to the eye: the strictly man made constructions. 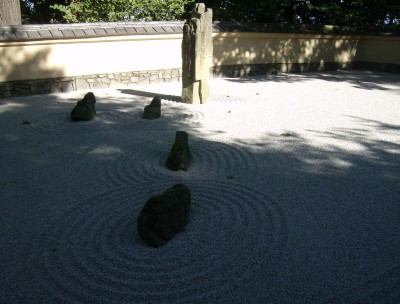 There are two exceptional garden pieces composed of white granite bits – resembling sand almost, or even water – which pose this stunning sort of stark foreground for a very limited display of natural products. The top picture shows the upright “Shibumi” rock, arresting in its solitude and quite interesting as a natural shape. Its naturalness is sort of undone by its obvious human placement but its antiquity and timelessness represents the natural world without further explanation. The chances are great the rock is a billion years old. Its preciousness is secured by its loneliness as the sole representative of Time itself. The smaller rocks arranged around it represent a nearly social grouping, separated by the raked surface which most represents water, ironically, and the shimmering effects always revealed when touched no matter how lightly. The minimalism of these characteristics speaks unheard volumes in explaining the ripples of Time and Cause and Effect, connected as they are by a human rake and shovel. It proves that tension is evocative. 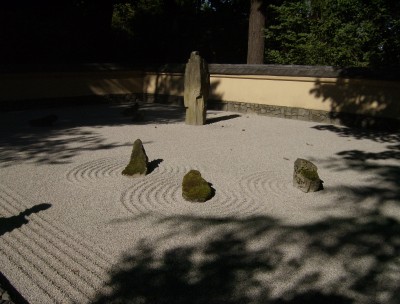 The garden below is a personal favorite part of the Garden.This one has a different purpose from the tight, tense placidity of the ones above. This one’s purpose is similar in that the foreground of the white granite pebbles gives an almost liquid serenity. The sole raked beam, coursing through it in a curving and sensuous manner gives us that hint of humanity and the grace of artistic human forms, but it does not intrude on the clarity of the vista the entire complex gives. Here we have the openness of a clearing where the distance seems farther than it is. The optical illusion is effective. It is as if the forces aggregated across the still surface pile up in their diversity, and form a nice crowd of potential friends and enemies. 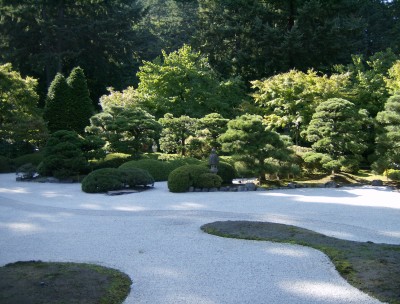 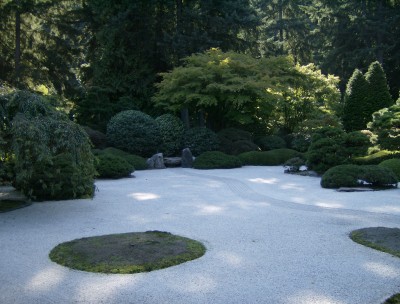 The plants around this garden actually hide it well, which adds to the sense of solitude and discovery when one encounters it. I mean, it’s a huge area.  But who knew??  I absolutely love that idea, as well as the rest of it. It seems we are offered solitude at almost every turn in this delightful garden. 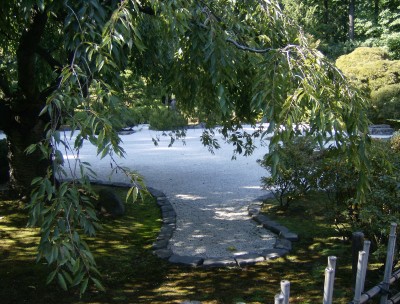 Meanwhile, other man made articles pop out at us from surprising spots as we walk. The Japanese and Chinese both love etching their comments on gorgeous natural stones, arranging them in artistic and very appealing ways. 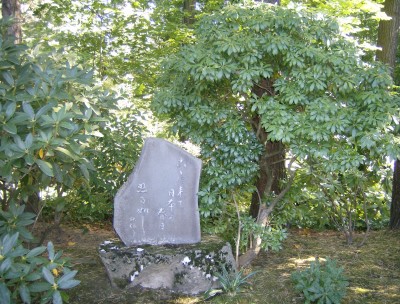 The commentary is typically minimalistic and in poetics, describing the wonder and mystery of all things. Meanwhile, other rocks are placed simply and starkly, features of their own, giving us a glimpse at the unchanging character of Nature and her Timelessness. They stick out like small explanation points, highlighting Nature’s beauty of form and the randomness of beauty itself, if only we have the ability to see it. 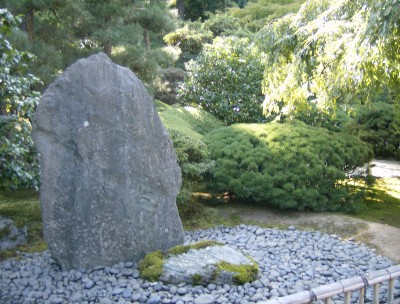 This Garden is so representative of the Japanese Art of Gardening it is actually somewhat astounding in its purity. This was the first of many trips for me to this gorgeous spot. It will definitely be a highlight for visiting friends and family, much the same as the Portland Chinese Garden where I actually played an active role in its construction, as seen and explained in this blog elsewhere.

Nor am I done. Next, I will address yet more man-made aspects of the garden, this time taking a look at the sculptures and artwork, including the constructions of the garden gates and arbors. 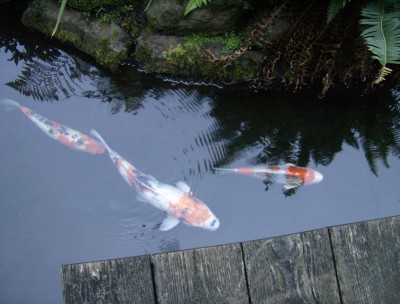 8 thoughts on “Portland, Oregon Japanese Garden – The Man Made Parts”