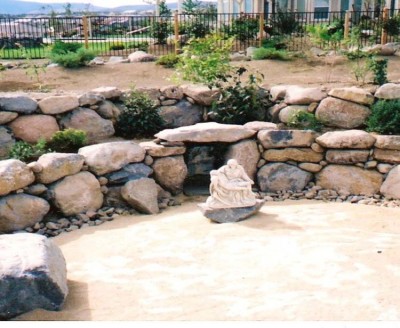 We had a client with a most religious orientation. He was Catholic and he was intimately involved with his church and things related to it. A very nice man who wanted a private and peaceful spot for his meditations. He is in a moderately-populated neighborhood, so the idea of a recessed area with some religious motifs around is what he very directly asked for. This would give him not only privacy, but the quiet he so craved. We excavated a huge hole about 50 feet round and 6 feet deep. We would use a floor of sand for a soft subsurface, put a ‘crust’ of decomposed granite about two inches thick on top of that and put a couple of rocks in strategic locations, perfect for sitting and relaxing. For walls, we used local rocks and tried to go for a sort of early Romanesque look, a little primitive, yet stacked nicely. The rocks add a sense of permanence to the overall effect. We placed a few Christian Themes around: a grotto, recessed in the wall, which would double as the “Tomb of Jesus”, an opening into which he placed his own very interesting Salvador Dali print of “Gaia On The Cross”.

The visible plants here are two Viburnums opulus ‘Roseum’ flanking the “Crypt” and a creamy Tree Hydrangea behind. Others include junipers and some lavender, for scent. I always try and make them smell. I’m bad enough, that way they forget about me quickly. 😉 We also put a number of smaller grasses around with some perennial color, including this pitch black bloomed Hollyhock plant.

We also made a small fountain, bubbling in small amounts but audible and visible, to double as a sort of Lourdes. He placed statues around appropriately, for example The Pieta by the “Tomb”. It is a delightful area, rather serious, very quiet. The privacy was achieved immediately, simply by the depth of the structure. As plants develop, it will only increase the sense of isolation and privacy. It is a place of repose and meditation, an interesting project for us, and the client was delighted.

6 thoughts on “A Garden Grotto”