This post is of a project we undertook in 2004 – in the Spring – for a great couple, Jeff and Denise, and their young red headed kids who were not even arguably cuter than buttons. They were a feature every day, the little guys, and who were, not surprisingly, fascinated by their daily Big Show out back of huge machinery and big fellows moving dirt and rocks all around. 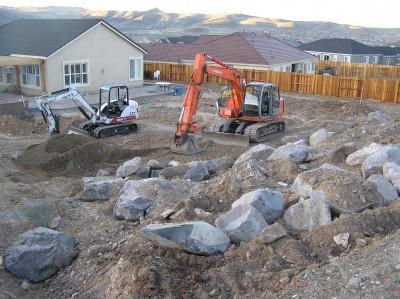 What 4 year old in his right mind would not dig (pardon the pun) this set up?? Huge and gnarly, all these humongous toys kept them entranced as long as they were awake. Below, for example, is what it looks like when you get 20 yards of topsoil delivered to your house just a few feet from your favorite back window! 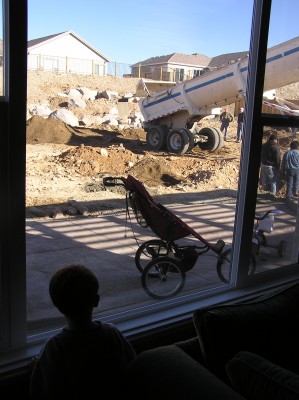 This picture is us digging those tiny (not!) channels for irrigation pipes. Hey, you use what you have! 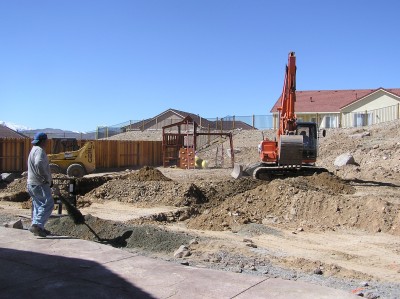 The home was pretty much Jeff and Denise’s “dream home”. After getting the inside of their place whipped into shape, they then focused outdoors, naturally enough. They had a full acre out back and they wanted to maximize what they could get out of it. They provided me with a laundry list of things they wanted which read something like this:

1.) A running water feature with a creek and small pond. 2.) A platform and an electrical (220V) supply near the water feature for setting up a spa away from the house. 3.) A nice big irrigated lawn with a surrounding pathway for the kids and their trikes and – eventually – bikes and motorized transportation. 4.)A horseshoe pit straight out the back. 5.) A play area for the kids. 6.) Some pathways on the rear hillside. 7.) An upper level patio, very informal, bedded in Decomposed Granite.

They were looking for ways to squeeze the budget which would still allow them to get all the goodies they wanted. The list was long and challenging but I immediately saw the potential in the overall landscape. We would take advantage hugely of the hillsides surrounding the East and Rear sides of the property, using it for our creek and the spa placement. Providing pathways would be easy and interesting and would cut through the landscape in a winding way. Jeff and Denise and I huddled and came up with a reasonable budget. Helpful – no that is an understatement – what swung the deal in favor of total possibility  was that Jeff could provide all the machinery we would need. What also helped were his connections regarding trucking and rock suppliers – there being some excavations nearby that had the marvelous rocks you see throughout the property. That brought the budget down so far that suddenly it was all as doable as it could be. So we shook hands and took off on our grand landscaping experiment. It would be fun, especially inasmuch as Denise was at home with the boys and offered her opinions daily and in an unobtrusive and truly cooperative fashion. In the end, she has as much to do with the ultimate look as anyone. I consulted with her often, and as often at my request. She was always a treat, honestly.

Anyway, we began and, once we finished the irrigation issues, and after burying the pipes and backfilling them, we were ready to entertain deliveries of both rocks and soil, both in the 200 yard range as totals. So, here they came: 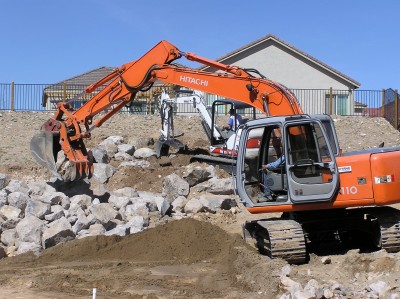 Once delivered, staging became an increasingly knotty problem. In the picture above you can see us placing rocks in their eventual resting places with the smaller excavator placing them and the larger one picking and separating them just after their arrival. They tended to come in 3 sizes, from humongous 2-3 ton slabs, to medium sized ones from 500-1,000 pounds, to smaller, one man sized rocks. It is actually somewhat tedious at this stage, in a way, although the placing of permanent fixtures is always bracing and challenging. You can never get bored with supplying something permanent for a client – the appearance and selection will be there for ever. Some heavy duty cosmetics here. So, anyway, things began taking some shape.  In this picture, both the “upper level patio” and the horseshoe pit have been outlined in boulder placement. 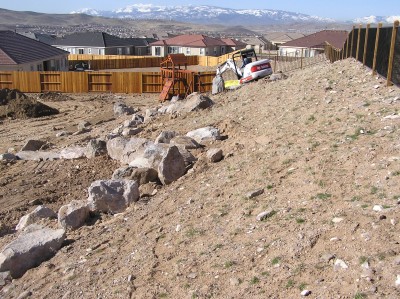 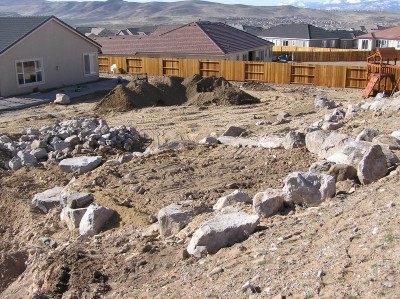 Yes, there is still one huge pile of rocks down there. That is for some detail work as well as almost entirely dedicated to the water feature, which is being scratched out in the picture below. We typically excavate the channel which the water and all acoutrements will follow, then add the liner and, of course, the rocks defining it last. 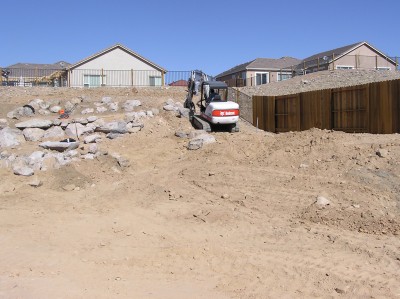 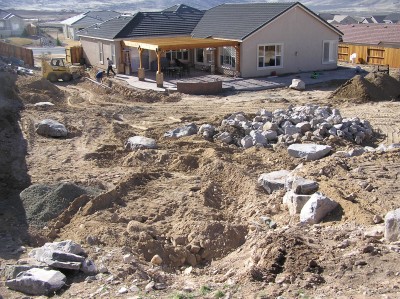 And there you have your standard-average scooped out water course. Next, we make the water feature, starting at the top: 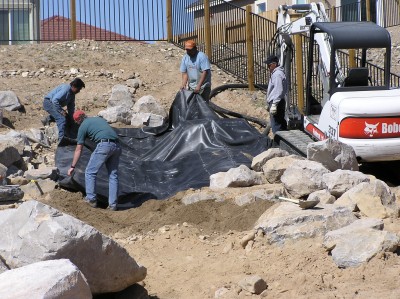 Adding rocks on top of liner is always the single most nerve-wracking part of any large job. One false move with that machine and the rock – and especially this type of “fractured rock”  – can poke holes in the liner, the worst possible result. So we operate gingerly to say the least and we also use other pieces of the liner wedged between the new rocks and the liner to protect the all-important liner itself, providing a measure of security as we worked.

The excavators we like using for these events are amazing tools. You act like a jeweler or watch smith or something placing one and two-ton boulders as precisely as possible in place. Plus, as you can see by the always-helpful Fernando’s directions, you always get helpful advice, lol. 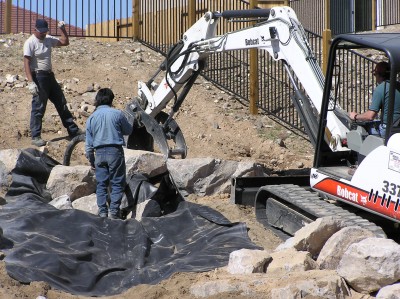 Looks like Chaos, don’t it??  😉  Note also another wonderful development which is the very durable flexible pipe we use as the source. This one was a 4 inch pipe and made the project ten times more do able..it originates in the lowest level, at the bottom of the pond itself, then stretches back up the hillside to where we see it, ready to provide the essential “source” for this recirculating edifice. 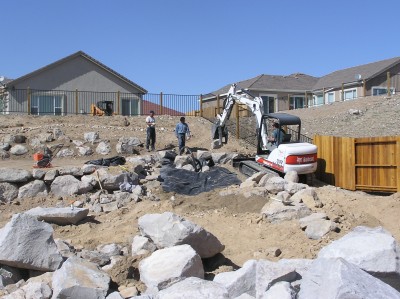 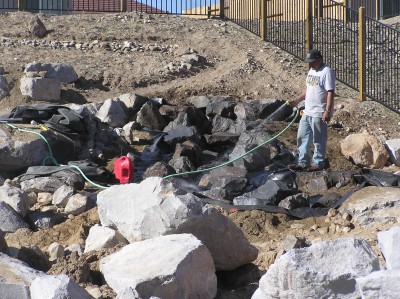 So that yields to this: 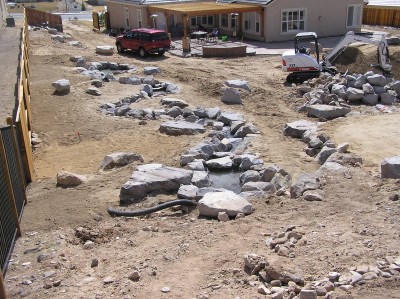 Next post, we add plants, grass and finish all the paths and stuff. I think you can see the madness all actually had some later-crystallizing plan to it. Thousands did not!  Had to say it.