On the face of it, a person could deem this a pretty attractive patio. The alternating exposed aggregate and broom-finished tops of the finished panels looks interesting and even somewhat unique. The few flaws it began with never really amounted to anything spectacularly bad and so it served as a great outdoor environment for this nice couple for a few decades.

(most pictures enlarge on clicking) 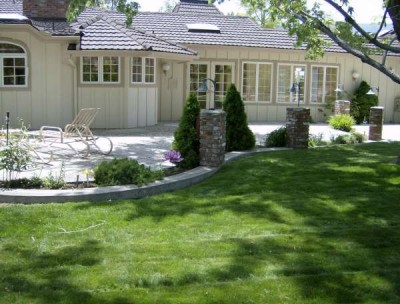 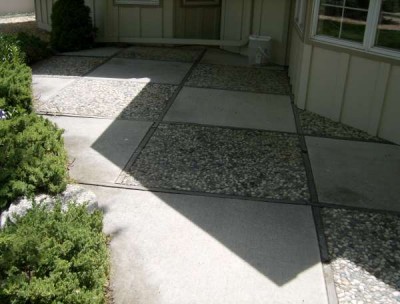 Eventually, however, things began breaking down. Especially when wood products are used in conjunction with cement such as this place, the eventual deterioration of the organic product is simply inevitable no matter how much sealer or preservative is used. Being as this is in Reno, there is also the deleterious effect of the constant onslaught of sunlight. The UV ratings for Reno off simply off the charts. The sun can act as well to hasten the effects of constant drying and wetting of wood from sprinklers and the washing of the patio. Add snowfall effects and the salty and chemical additives to the snow removal process and you have a perfect storm for concrete deterioration.

The bottom line came when the residents began tracking deteriorating pieces of material into their house with regularity. The cement was crumbling and deteriorating after the long years and the floor in the kitchen was showing it all. Where the wood partitions in some of the cement panels had worn down, their edges produced a fairly constant source of gritty dust and chunks of cement. They decided they wanted to redo it all, in short, so they called us. We agreed on a product and a price as well as a schedule and began the work. Our first order of business was to take out the old patio. Jackhammer in hand, we went at it. 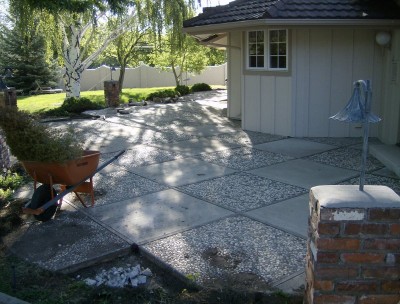 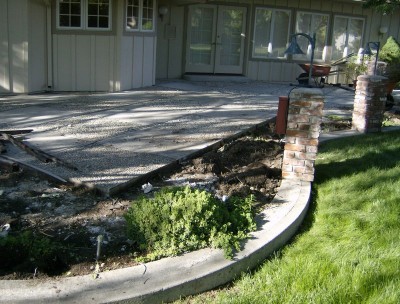 It was actually not bad work, as these things go. Yes, it was constantly in the upper 90’s at the time – even past 100 degrees later on in the project – but, as can be seen here, there was ample shade from a monster European Birch nearby. Having that tree was pretty fabulous. This work is hard and when it’s over 100, something more than hard, moving into dangerous. Did I mention we liked the tree?

Anyway, we finally cleared the existing mess then excavated down a ways (the cement has been set on soil, as we had expected) – this way we could establish a sub base of our own compact able rocky material, standard in all our paver installations. 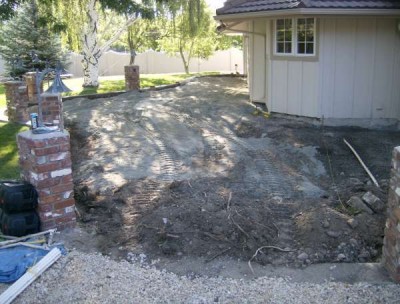 There were the usual abundance of items to watch out for below the surface, from irrigation lines to electrical conduit, almost all of which we had no desire to replace, so it was a bit slower than one might want. 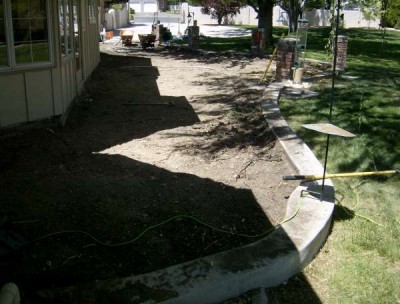 Just the same, as can be seen in the above picture, what we did was excavate and fill, taking away soil and adding a rock mulch to replace it with. As I have explained in other posts, we look for a very hard and durable sub base below where we add the pavers. A thick layer of base rock can often get us to a compaction intensity we want and which will assure longevity and durability.

So we add the base material, rake it out, then wet it to about 12% and run a compactor – a plate tamper – over the top of it. This vibrates and provides an amazingly intense downward pressure with  lot of weight. The combination of shimmying and weight leads to a supremely tight and well-compacted substrata. What we end up with is a fairly good surface, over which we add approximately an inch or less of a fine washed sand. The sand allows us to grade absolutely perfectly, leaving a surface we know will come out just as perfect as is what’s below. 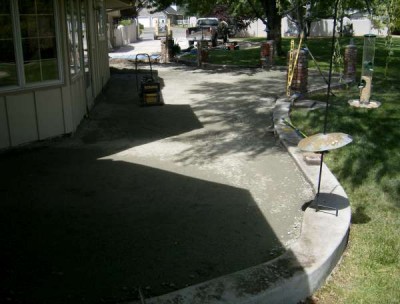 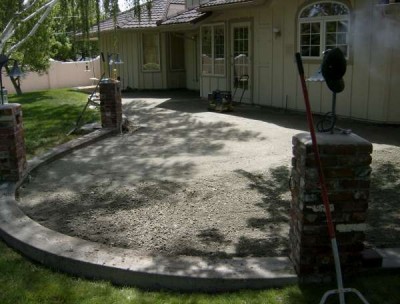 From the above stages, we go to the next phase, which is far more detailed. Arriving at the finished grade at the surface, at this stage every move we make will reflect on the top. It has to be perfect. The sand allows for some faults occurring below to be rectified. The sand process is always the final answer, grade wise. From here, we lay the bricks.

Drainage: Even in somewhere as generally dry as Reno, Nevada drainage issues matter hugely. The fact that Reno gets almost all of its rainfall (and snow) in a 4 month span means as well that it comes in a rush. I have seen 4 foot snowfalls overnight as well as consistent pounding rain arriving in buckets. In a sense, these downpours and packed snow problems make for an environment every bit as threatening concerning drainage issues as anywhere, including the North West. We were extremely fortunate that the concrete edging used for the initial project was still very intact and usable. It had a small % grade – around 1 percent (translating into 1/8 inch per foot)- which is perfect. I only mention this owing to how vital it is in general. This project was pretty fabulous for that reason and allowed us to rearrange things in an orderly and far easier manner. But know this – mistakes in drainage are lethal to a home’s foundations and for general appearance and wood damage. Just a head’s up: Make sure things drain away from the house. 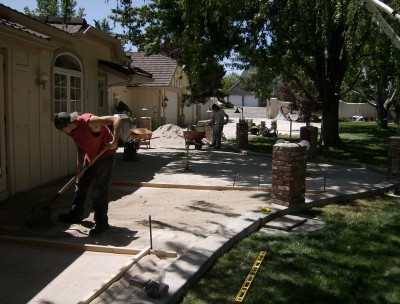