With the sub base intact now, and the sand ‘screeded’ (leveled) at 1 inch thick or so to give us a fairly perfect base on which to lay pavers, we begin laying in some pavers. The irony of paver placement is in the speed at which they can be laid in place. I say “irony” because, with a perfect surface to work on, the pavers get laid about as fast as they can be brought over to the layer. Easily the most labor-intensive aspect of any paver project, it is the one place where a strong back and a good set of legs gets things done in quicker style. 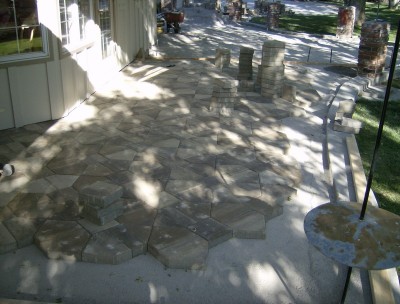 While the general coverage goes fast, as always, it is the details that hang one up. Here my foreman, Kenny, gives a wry look at his business while dealing with that week’s equivalent of the New York Times Crossword Puzzle. 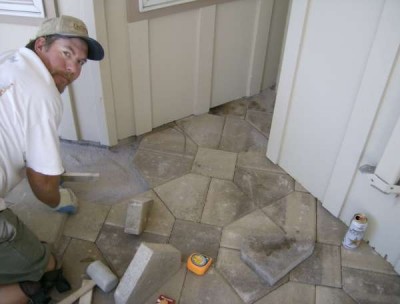 Nasty work! Adding to his woes, the tolerance for achieving the sought-after drainage meant we needed to shove the pavers under the wood almost at the same level where the initial cement was placed, which was at the highest grade achievable. Snug. It’s a pain when the pavers that get cut need to slide under such a minimal tolerance. It literally requires putting pavers down, then lifting, then fitting back. One just hopes the cuts were good. Otherwise………..the dreaded interpersonal fireworks! 😉 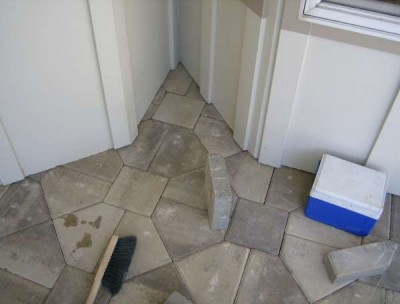 For an idea of how the trimming of pavers to conform to the edge is so vital, take a look below. Bear in mind, this is the outer edge. Imagine doing it blind, like Ken did above, with the siding protruding over and just a tape measure to get it right. It takes some serious patience to get it right and he pulls it off regularly. He’s a better man than I, lol. 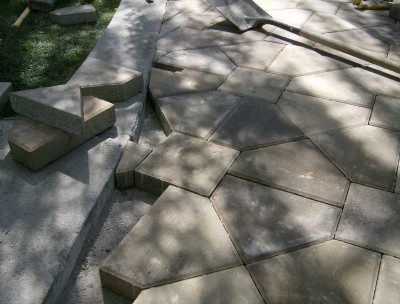 Here is another look at the outer edge. Plus, the work in the upper part is what the “screeded” sand looks like, just prior to getting pavers laid over. The small rubber mallet is used to “persuade” reluctant pavers to get with the program and go in. It also serves to tamp them down into place. 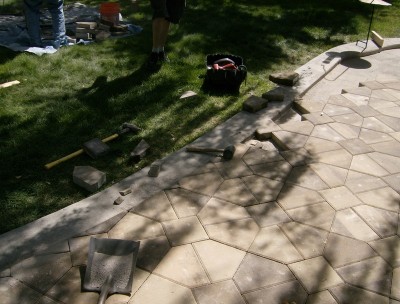 Here Corey is placing them after cutting. He was on his own on this while waiting for Kenny to supply those nasty fitters under the siding. He also did a fabulous job on this project, acting as the primary labor dude, hustling pavers over and then adapting to his next chore which involved cutting and placing the edge stones. He was The Man, too. Very fashionable shorts, I hasten to add! 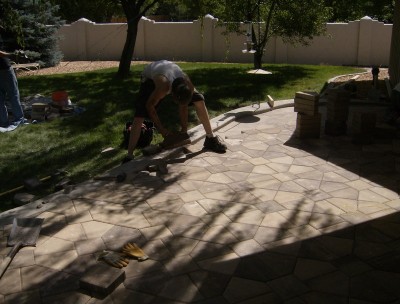 Having said all that about all that, a good edge is a beautiful thing. It satisfies the professional in the installers and it is something clients adore no end. Forgive the terrible focus on the next picture, but I think the idea of perfection and its appeal is borne out.

In the end, we end up with a very satisfying end product that met every criterion they asked for: an attractive surface, perfect in its level, easy to walk on and rather sumptuous in its overall appearance. 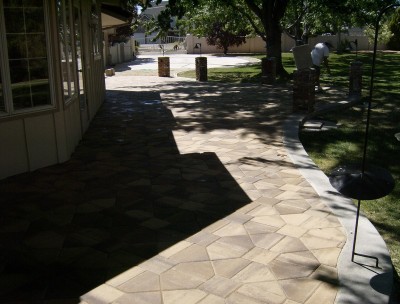 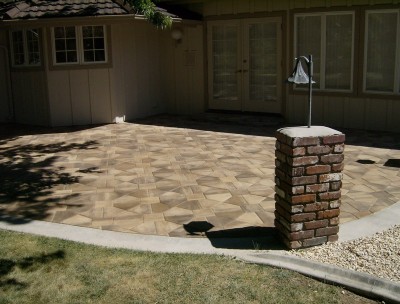 I omitted the fact that there was an interior patio as well. It is inside an atrium, surrounded by the house itself and which developed the same cement problems with deterioration. It was somewhat painstaking packing the heavy and very sloppy broken cement through this gorgeous home, so we obviously protected walls and floors from our assault. In the end, it worked out every bit as well: 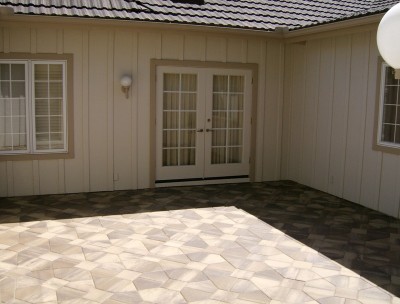 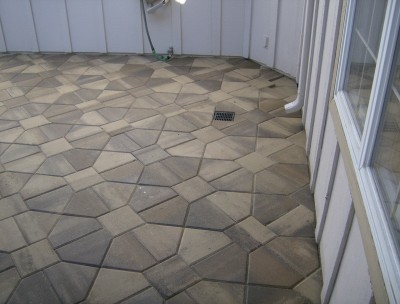 2 thoughts on “Replacing A Cement Patio With Pavers – Part 2”