In rereading this I became struck with how the inherent ‘selfish gene’ can overwhelm a blog based on the author’s own life experiences. In describing potential contractors below – in more places than I care to edit – I have omitted the growing number of females in this huge field – and their unquestioned successes. Not just as designers but also as workers in the field, females produce some serious work. It’s topical and all these days, I realize, as we consider female roles in the military. Just the same, I guess there are reasons for both. I just want to somehow apologize and insert some good hypocritical golf clapping. 😉 (Feb 24, 2013)

This is a re-posting of something I wrote as a very, very informal guide to assessing and choosing a landscape contractor. These sorts of articles I feel bear more forcefully on issues of merit – the meaty end of landscaping and finding out who is good and how most contractors wish or hope you will behave as a client.

I also believe stuff like this – the realities of the contracting profession – are why many people actually check in here.

As the economy recovers – sigh, no matter how slowly – there will be a few more folks who want to do landscaping around their properties. Indeed, there are commercial clients as well – local businesses – who decide to make their places more appealing by taking advantage of the newest technologies to update water features, lighting and a true myriad of startling technologies which have continued to develop even while our overall economy drooped. Incredible new pumps, LED lighting and the machines to install the work have had geniuses scrambling and producing amazing stuff. All somewhat cheaper, better and more “Green”.

It leads us back to the raging questions raised during the economic peak we endured just prior to the recent “collapse” and real estate nightmare. At the time, many potential clients for landscaping were searching for clues to who to trust and how to conduct a more thorough, value-laden relationship with designers and installers of landscapes who would be trustworthy and artistically able to provide the expertise and wherewithal to implement their hopes into tangible, rewarding results. 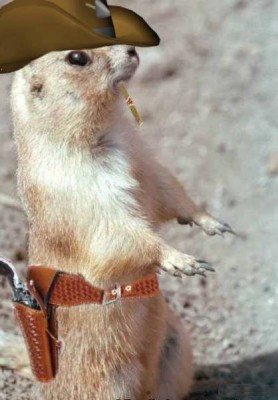 In busy periods, contractors are infamous for many things which become typical and almost, (in their defense) unavoidable. Time issues are among the primary worries they have. Notifying people that they might be late to an appointment, or maybe not coming at all is certainly one of the primary sources of exasperation for potential clients and, yes, it is unforgivable. However, Time, for the contractor, is everything and some handle it better than others. I was once told that by simply answering the telephone, it would be the best method of acquiring work. It turned out they were very nearly 100% correct.

I suppose I am beginning with a caveat which is probably not all that smart.

Make no mistake………… Promptness, for the record, is still an asset. It always has been and always will be. It ranks up there with manners as exemplary conditions under which to enjoy other people. It goes without saying – and particularly in this age of instant communications and cheap phones, that I – personally – would always try and alert someone to my progress on making an appointment. And especially an Initial Meeting. My charge here is to mention that violating the time issue for an appointment has some hidden value and a perverse sort of counter-intuitive sense.

If, for example, the contractor is busy, the chances are very good it’s because he is in demand. Furthermore, I know for myself that the client I now have and am working for absolutely precedes in importance the next client, no matter who it might be. Naturally, these are always a part of any businessman’s milieu – this little dilemma represents dealing with real problems on multiple levels. Needless to say, those contractors who, like myself, actually also do the work are more of what we are referring to in this example.

In short, if there is a thorny and intensely-involving problem, I do my best to focus 100% on it. This can include forgetting absolutely everything and making sure the current client gets satisfied. But enough of this.

Here, then, are a few “for what it’s worth” rules, some etched in stone, some not, when you consider hiring a guy to come in, make a huge mess and completely take over the land around you:

1. In the states where it applies (and this is your very minimal onus to find out), make sure he has a state contractor’s license, first and foremost. Does he/she have references? From clients? Did you check them? You should.

2. Another rather primary consideration would be acquiring other bids, from other contractors. I say this although there are times when the eyeball test and a client’s intuitions can over rule this, based on many other factors, including reputation. But the standard in any industry is to get 3 bids.

3. Does he or she work with you? If a homeowner has ideas of their own, I always treat that as half the battle in terms of design. It makes my job easier, not harder, when someone has a notion and a concept of what they want. Plus, you can feel more involved, as a client, literally designing your own place.

4. Do you have a budget? This matters hugely. It does not pay to set a budget then try and work underneath it. What works best, ultimately, is to design a wished-for scenario/environment, have the guy work on it at home, then get back about what he thinks it might cost, ballpark. At least, that’s my normal modus operandii. If indeed, it appears your budget will work, and if, by some lucky stroke of nature or your own brainpower, your original budgeting leaves you extra money, Great!

5. Typical pay schedules: I typically do the following: 50% up front, 25% at the midway point on larger projects, then the final 25% at the conclusion of the job………when satisfied! Another approach I have used divides the contract by thirds. 33% up front, 1/3 halfway through, then the final 33% on satisfactory completion. There is a reason for all this. Typical costs for doing landscaping work involve enormous up front expenses. Soil, bricks, water stuff, pumps – in short, nearly everything except for plants and grass occur almost immediately upon entering the project. And this omits such other costs as payroll, machines/tool rentals and the rest, many of which are specialized to landscaping for most-specific tasks. Let me be clear – no one gains from stressing a tradesman’s ability to purchase products for your project by using his own money for your project. It happens, of course – far more often than people think – but when there is a level of comfort in all directions, a project proceeds about 90% smoother, faster and more professionally.

And who wouldn’t want to pay this guy? 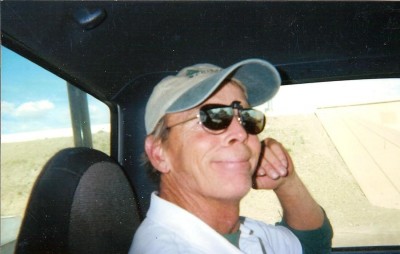 A landscaper’s references will depend, in the end, on how happy or upset he left his client when all was said and done. At times, the gnarly little details can derail everyone’s satisfaction. Landscapers should meet this reality head-on. It’s why they ask for more than just what the gig costs, after all. Pleasing a finicky client is not a problem for the best at what they do. And – to any client or potential client – Do not be afraid to mention small things. They are also a part of the job. Being aware has never been a crime that I know of. The music to a landscaper’s ear, and, yes, I have heard this, is the following: “We knew it would be pretty, but we had no idea it would be this beautiful!” This is what happens when all things proceed with a relationship based on respect.

6. I have mixed some stuff together, but hope it becomes clear that professionalism is not an option in this trade. It is an absolute must. It is an expensive trade, often following the rules of anywhere from 5% to 15% of the value of a house. This is serious money. If you have a bad feeling about someone related to his professionalism or lack thereof, then do NOT use him. A person can be casual without being sloppy.

7. Sign a contract. No if’s and’s or but’s. Make sure the language is crystal clear and you should have zero problems.

8. Check progress. There is nothing worse than a landscape contractor realizing 90% into a project that the client is not happy with something. If there is an item missing, a troubled client needs to make it known. We expect, as contractors, to hear these things from clients. Alas, we are not perfect either. I wish I had a buck for every client who saved me by mentioning a problem he was having and, ahem, thought maybe I had forgotten about, say, the garden sculpture. Or the, um, grass, heh heh.  😉

Conversely, when a client realizes that perhaps the design they both agreed to does somehow just plain not work, a few words with the contractor right away might just rescue things. Landscaping can be very fluid – the realities on the ground can become problematic with some weird events – the discovery of underground cables, a huge boulder impossible to move, etc –  so do not hesitate to ask questions or offer opinions. The contractor may ask you as well, of course, about adjustments owing to these events. Be flexible and creative. In the end, as ever – The only dumb question is the one not asked. 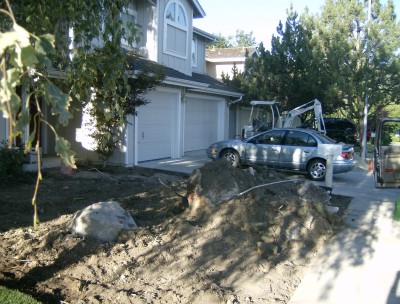 9. Remember this: (I tell every single client I have the following words:) “Landscaping is 80% preparation and 20% finishing. ” There will be an unholy mess, with machines moving dirt all over and mud and seeming chaos. It is what we referred to as a ‘Beirut of the 70’s’. Fear not. We know what’s up. Longer projects can be exasperatingly dusty or dirty. Just remember how the final result will make one feel. A bit of patience here is called for and very much appreciated.

In the end, we’re looking for something to feel wonderful about. It is possible, too. 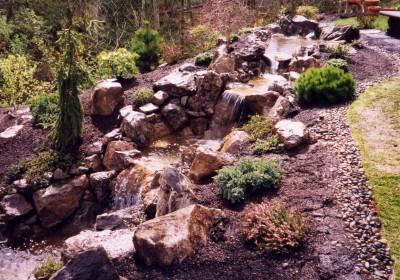 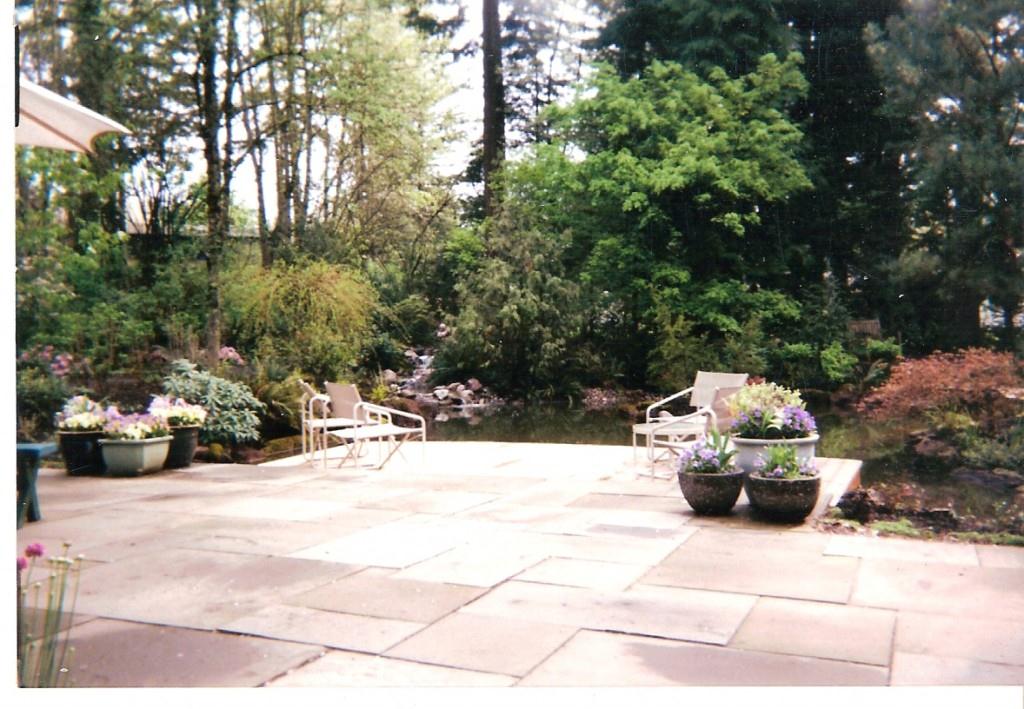 If you can somehow enjoy the process, you may have met someone you like. This is also possible.

More importantly, both you and the contractor can be equally thrilled at a good result. At the very best of times, people like him live for this stuff. 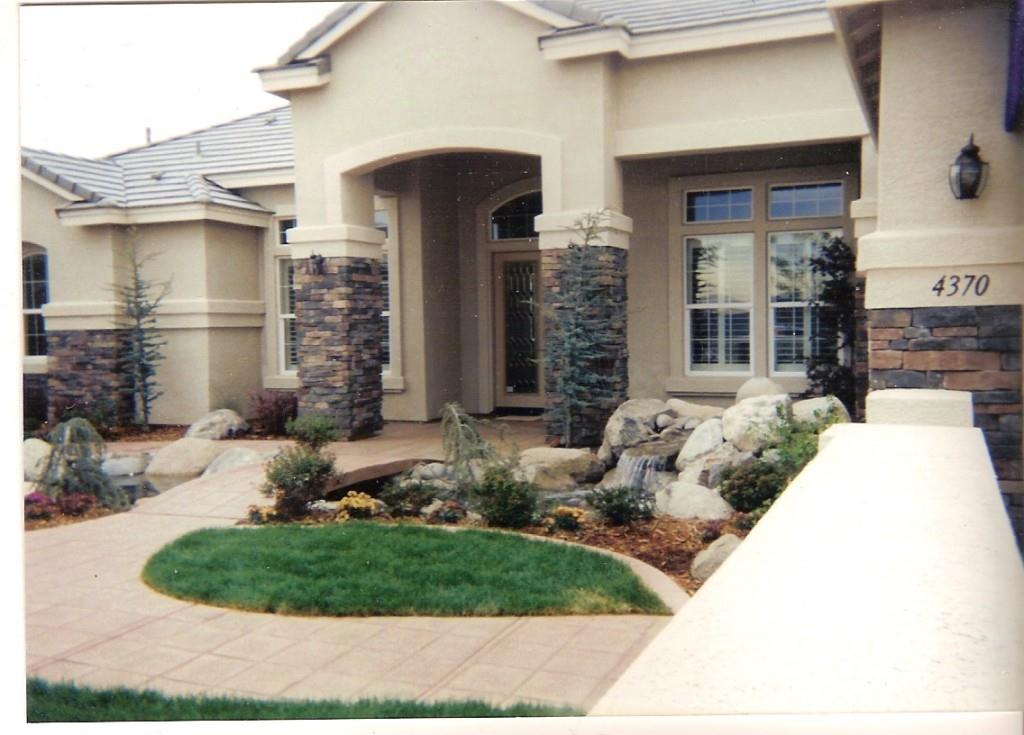 6 thoughts on “What To Look For In A Landscape Contractor”