No trip to the Portland Rose Garden should omit mentioning the Miniatures they have there. Actually, they are arranged in two or three different places, including – as the picture below shows – a “test garden” for varieties they are working into their rotations. 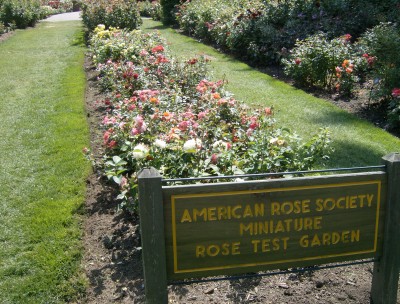 Following through with what I already revealed elsewhere to be my own sinful sort of relationship to roses in general, I am so adoring of those which mix and blend the bloom colors – or those which change during their own brief maturation. 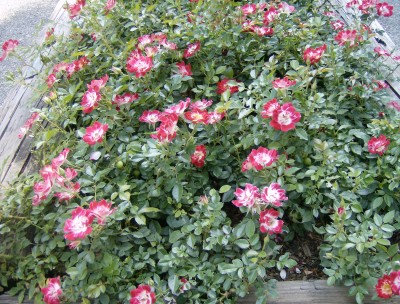 These two-colored miniatures just really struck my fancy. I would so love putting some of these in myself someday and I do plan on it. And, yes, there have been occasions when I have planted miniatures in my own projects – far more than I may have led us to believe. Working with as many rockeries as I have, they fit like Alpine Perennials into the cracks and folds of rock arrangements and do so with some startling durability. 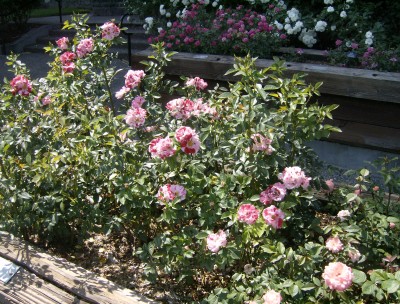 We now move to those which change on demand. Or seem that way, at least. If you don’t much care for the colors of these roses, you should just come back tomorrow when they look different! 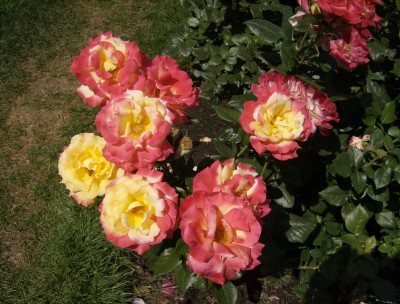 More red and whites in yet another area of miniatures, I’m afraid my biases have left out some other gorgeous choices. 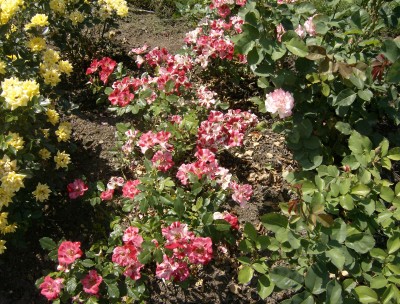 These orange ones, for example, are simply radiant. They are also profuse as they can be. 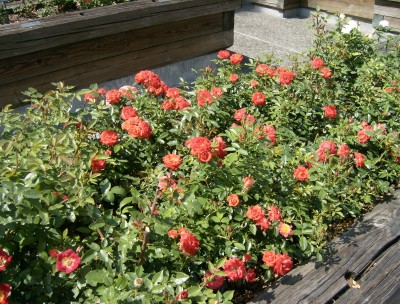 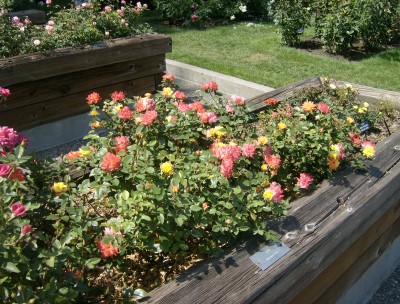 The yellow rose below I liked not only for the perky and effervescent color but I also was most attracted to their wild bloom formation – almost star-like. It seems a complete departure from the standard rose petal. 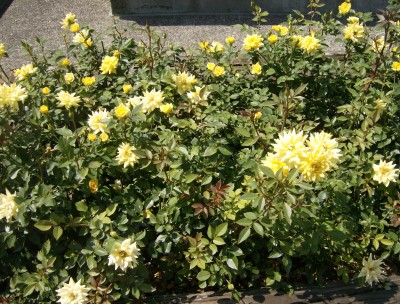 These shown below look somewhat bedraggled and all and, the truth is, we did catch them on the downside of their prime blooming era. But not by much! Simply beautiful, one can see what they bring to the party and why I would still opt to feature them, even if they are half-past spent. Indeed, these were a real favorite of mine, revealing yet another sort of petal formation – more like a spray. 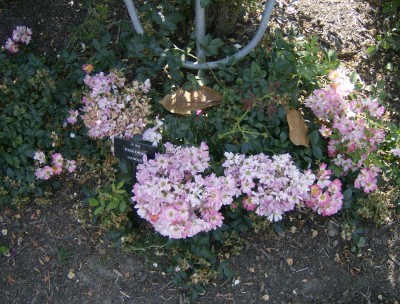 And now we move to another dimension of the Portland Rose Garden – its overall landscaping, disregarding for a few moments the extreme gorgeousness and ridiculous profusion of the roses they feature.

Below is a Hardy Fuschia, hard by a grouping of rose blooms but over by the overall edge of things where a hedge separates the Rose Garden from a very tranquil small garden setting, composed primarily of plants and grass. 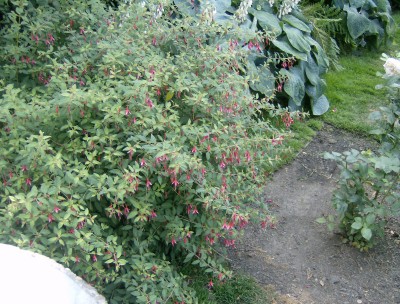 Here is the other edge of the fuschia, looking backwards with the hardy fuschia at the remote end of this hedge and the killer plants in between. Hosta, arranged in a landscpaed form, separated by deer ferns stand out dramatically as they always do and with such a rich and hearty foliage and bloom. 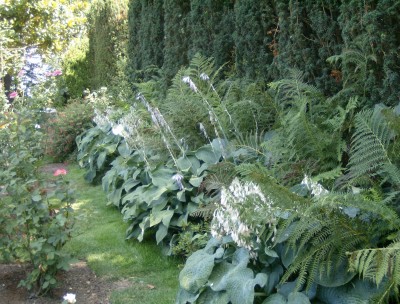 Around the corner is the garden referred to. Incredibly tranquil and just gorgeous in its lushness, this is one of those classic gardens the screams for solitude and reflection (is that possible?).  😉 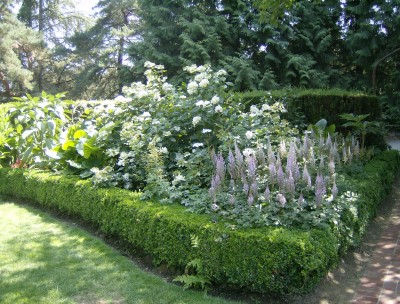 The Astilbe looking all hot-to-trot mixes with the Hydrangea in the above picture to present a full vision of lush and quieting Flora. Bordered with the always-orderly Boxwood hedge, the anarchy gets toned down a bit, resulting in an enforced order that relaxes the eye as well as the senses. About this time, one could definitely lay out for a good nap.

Hydrangeas are actually another virtually “featured plant” on these grounds. And we are talking about all sorts of different Hydrangeas, by the way. The rosy pink blooms of this one below contrasts markedly with the blues of the ones following that. 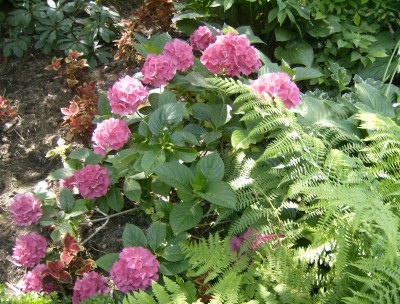 Here is an orderly row of  light-toned blues and whites, all bulky and full as they so often are. 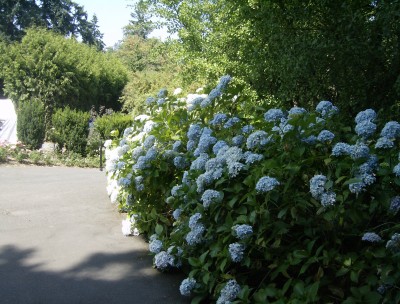 And here is my personal favorite Hydrangea – a “Lace-Cap” bloom variety which has always stuck me with its different look. Profusely blooming, as is the wont of Hydrangeas the world over, this one seems somehow economical in it’s presentation, while still profuse. I find the blooms to be complex and minimized. 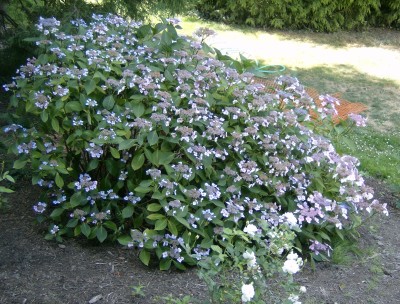 Yet another Hydrangea here, still among the “Lace-Cap” varieties, this one is stuck back in the depths of the garden so rife with perennials and ferns. 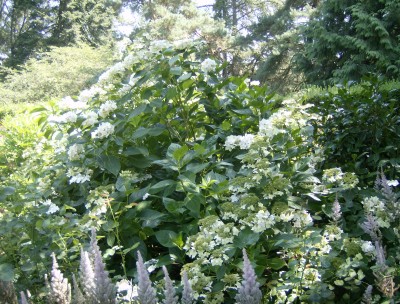 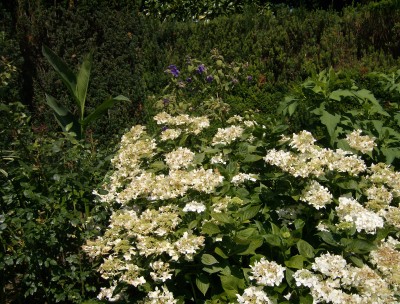 Another view of a Lace Cap blue, this one sun-washed and still-vibrant, I like the Begonia under, trying to assert itself among all the gigantic blue blooms. 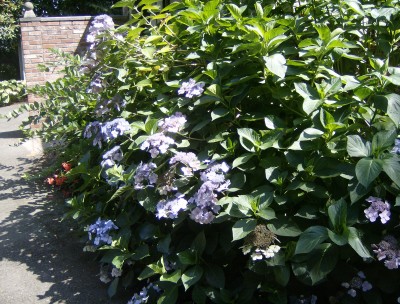 Overall, this great urban garden features a wide variety of sights and pleasures, many of which are fairly unintended. Take some of these anarchistic-minded roses, for example, poking through the periphery of hedging surrounding the more formal display areas. 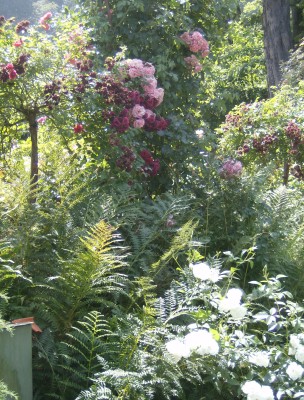 Here is another delicately-placed straggler looking as good as a plant can look while being allowed to basically just plain “roam”: 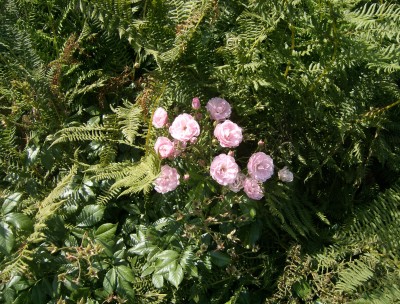 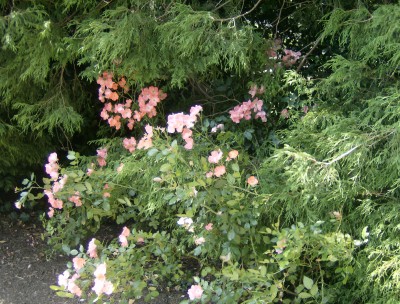 And, finally – speaking of Hydrangea’s – we have this interesting vine, long since overgrowing the building underneath it and now acting as a roof: 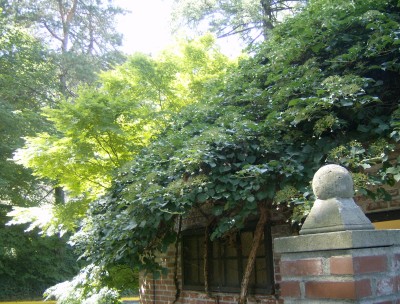 This is simply one of the most gorgeous gardens I have ever seen. It’s hard to get enough. 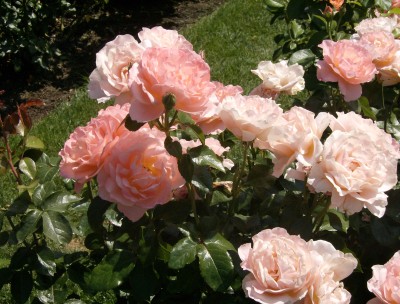