Here it is, Mother’s Day, 2012 and I find myself up and at ’em and ready to go buy a Mother’s Day card locally before she awakes. I will call my ‘other Mothers’ (That sounds just bad, heh heh) as well – My ex, Alice, Mother of our gorgeous child, my sister Diane, maybe by sister-in-law Lisa and I’ve actually been working for my other niece’s Mom, Mary Beth, on remaking her garden into her dream garden – a wonderful chore but rained out this morning.

Anyway, I decided to reissue these posts in honor of my Mother – posts which I actually wrote back in February. So you can see, I am not a latter day Mom-lover ……not a fair weather Mother guy at all……I come by my love and care for those Mom’s who were unfortunate to produce us quite honestly.

Happy Mother’s Day to all of you and to all those wonderful women who began life for morons like me. 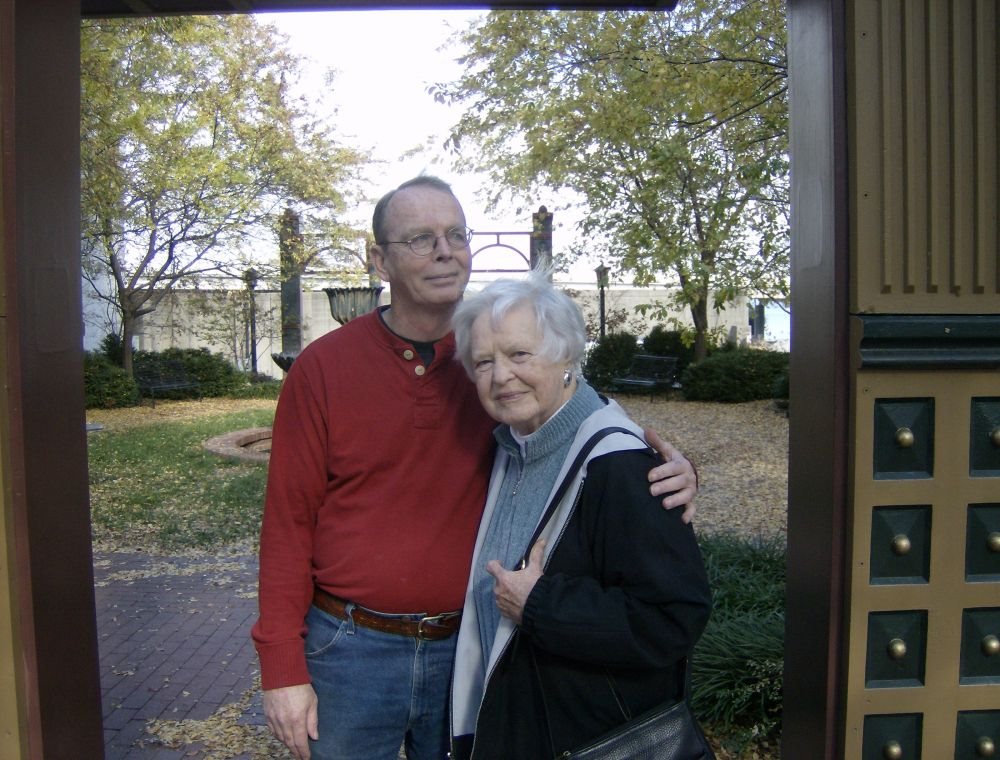 I could – and may – just as easily write about my father, Fred Snedeker. But Dad passed away in 1983 and my Mother is still around, “fresh off” Father’s passing, still in love with the man after 42 years of marriage and now 27 years after his death. We pass December 22 each year in a bit of prayer and remembrance as it is one of Mother’s worst days. Her devotion to Pop honestly is an awesome characteristic which I can barely even imagine, considering the course of my own uneven married events. But she is most definitely what you see. She has been through so much in general, and she feels so young at heart and so full of life and curiosity at 92 years old, she will forever stand as a guiding light for me and innumerable others who have encountered her.

I returned to Louisville, as I had announced, on September 30, 2 years ago. It was a beautiful Autumn in Louisville that season and Mother and I traveled all over town.

It gave her a chance to walk and talk, exercise and do what she does so well – teach. She reintroduced me to the area and we also discovered much which was all brand new. Yew Dell Gardens, Bernheim Forest, the wonders of Main Street in Louisville including the brand new basketball palace – Cave Hill Cemetery, the glories of Cherokee Park, their old rental apartment on St. James Court where they renovated into magnificence an entire floor of a beautiful historical old home. We were peripatetic after my arrival, getting out all over town.

(She had taught – Accounting Principles –  at various small colleges in Louisville until she was 84. These were full loads, standing all day, after which she would often walk up to 3 miles per day. At 90, she had given up her season tickets to Louisville basketball games – what used to be my Christmas Gift to her every year – although I did accompany her and her great good friend Kathleen Drummond to the opening basketball game in the new arena – Yum! Center – for the Louisville girls against Tennessee.)

Here’s a cool pic of Mom grasping her little Beena Girl at our place in Reno. I’s say she looks rather pleased. 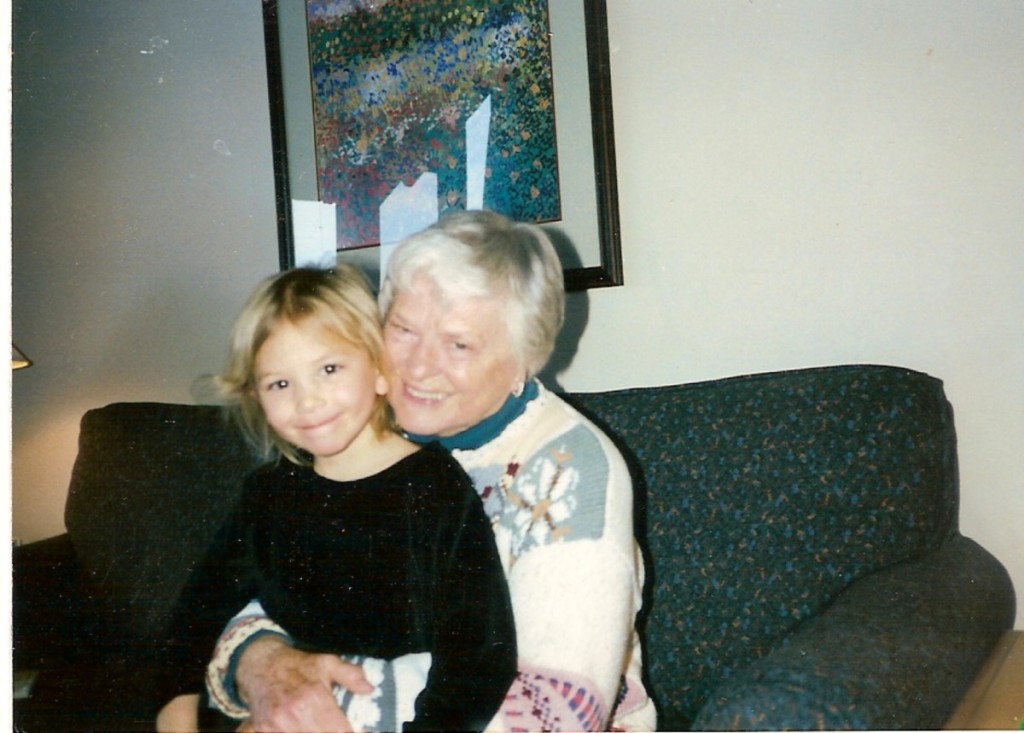 Anyway – this changed a bit after she suffered a couple of falls – while with me both times, sadly enough – and she has found herself just a bit less inclined to get all out and about, certainly not as much as when I first arrived. Her fragility has increased a bit, in short, although to this very day, she just finished 2 weeks on jury duty downtown. So she aint crippled, lol.

If one gets nothing else from reading this strictly personal tale of my own selfish interests, please know I do it because I can – for one thing. For the second “thing” – I admire this lady endlessly. For the third “thing”: even if I did not, I feel we gain from knowing older people. Their versions of history are remarkable and all-too-often silent. In our rush to buy the next new gizmo or catch the fab new TV sitcoms which so often determine our off hours, we overlook the hard yards the generations prior to us had to cross in order to deliver us to our Present. This person endured a period in our history which was at equal turns deadly, depressing and inspiring. When you ponder Mother’s birth year – 1919 – and what she may have encountered as an active, intelligent woman with an independent streak, you will find elements of the evolution of our National Consciousness represented nearly completely. It is supremely humbling to me, finding out about the casual cruelties administered to racial “others”, the poor and dispossessed and to women themselves during her lifetime and how she dealt with that.

Just the same, all I take from it all is currently, in real everyday life today – at worst – is that we were able to relish what we experienced since I have been here. Nor is it as if there’s not some mighty fine events which have taken place within the very walls of where we now live. While we haven’t set activity records, the love pretty much never stops in the persons of visits from her grand daughters and now her great grand daughters from the same gorgeous Meagan. Her other “grands” – my kid Alena, Mike and Lisa’s Beckett and Zoe, the very sunny Hannah, Meagan, Jenny and Aaron – simply exist as parts of a heart more than roomy enough to entertain stories and attention at any given time – on any given day.

It is often hard to relate to young folks what it means to have spoken and loved her Dad and Mom, for example, and hear about what life was like prior to automobiles and electric lighting. It was always amazing listening to her Dad speak of opting for a horse on snowy days to deliver the mail in the flatland and bitter winds of central Illinois during severe Winters.

Speaking of my Grandad and Grandma, they flank everyone here, with my Mom being second from the left, her sister Jody the Bride standing next to Grandad. My older brother and sister are obvious, as is the apprehensive young baby – me – seen in the foreground in the fashionable killer shorts. 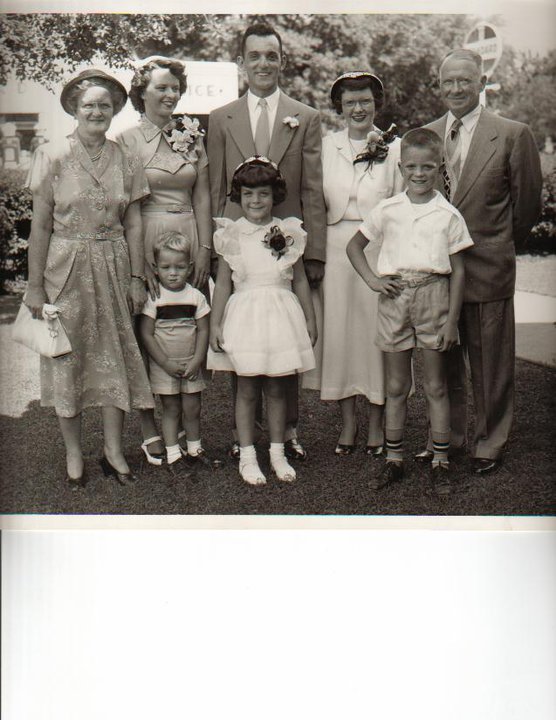 But it can be equally instructive listening to Mother relate what the times were like as she grew up a kid in East Central Illinois in the ‘massive’ (insert cynical chuckle) urban metropolis of Humbolt, Illinois – population 350. Our visits to “Granddad and Grandma’s” house always involved pretty much an all day ride and were spaced throughout my entire life as a kid as near routine. We got to make Icons out of various elements of this setting – my brother Mike, for example, has these “often-chthonic” dreams of the huge corn silo’s which existed beside the railroad tracks which also bordered the home there. Inside those silo’s, Mike has encountered a Stephen King-like retinue of events and weirdness which inspire creepy deep psychic exhumations and symbols which that sort of setting completely appropriately provides. Think “Children Of The Corn”.  Also, inasmuch as we moved so often during our childhoods – with our Father being a contractor and upwardly-mobile at that – Grandad and Grandma’s place was of pivotal permanent importance to Mike – and even the rest of us – who went to something like 10 schools in 12 years.

Mother’s beginnings were humble enough – one of two daughters of the local Postal Dude who pretty much knew everyone in the local world, Paul Rogers and his wife Etta. In the end, Paul Rogers – her Dad – ran that route for 47 consecutive years. This placed them in a reasonable spot with permanent incomes as the Depression and the Dust Bowl wore on throughout Mother’s childhood. She was even able to attend college at Eastern Illinois University, where she met my Pop. Their stories are private but her confidences concerning their romance have absolutely warmed my heart like few other events. It is moments such as those where I almost always reflect on how incredibly cool it is to be able to share these splendid times with such an experienced yet loving Mom.

“The Choice” – whether to return to Louisville in person and launch things totally ready to help out –  arrived at one evening out on the porch at Mike’s home during one of our many Sunday dinners in Portland, talking with he and his wife, Lisa. It remains a decision I am more than content with and one which I actually wish more could share. I feel lucky now.

A cool look at the ‘fam’ – brother Mike, sister Diane gabbing at Meagan and Jeff’s wedding while Mom proudly looks on. 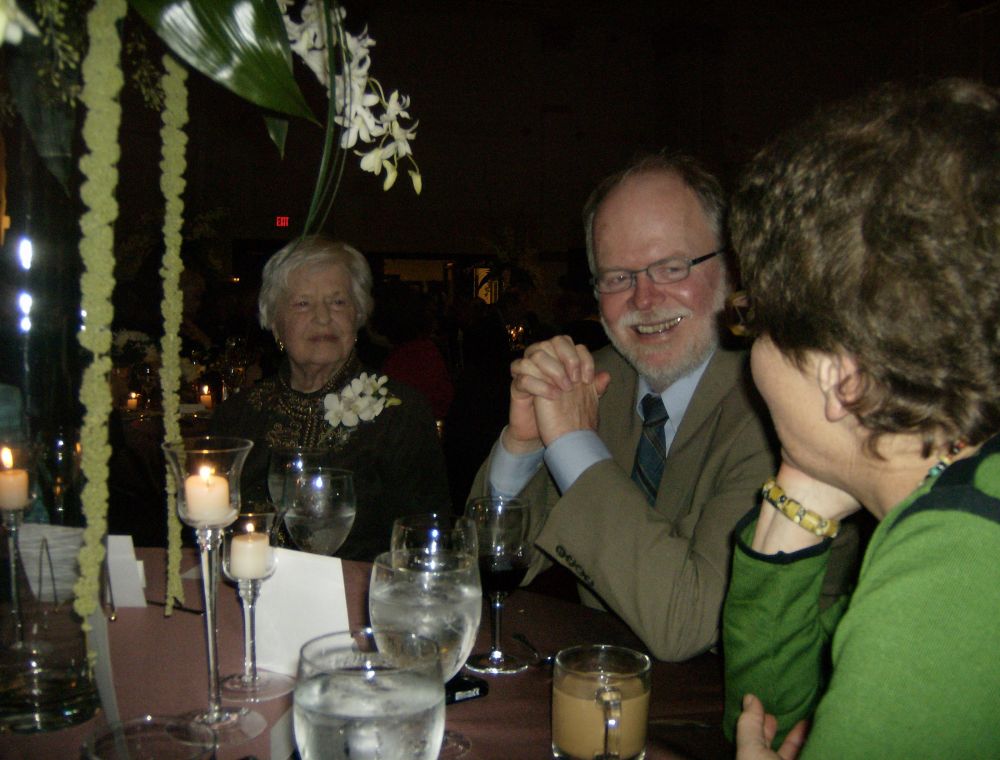 Whereas Mother had recently experienced a broken back (lol, true story) at the time of our sibling confab, and seeing as how she had also experienced a few financial setbacks, we sat and contemplated what we could do. The more we explored things, the less satisfying they were. I had recently stopped landscaping full time and had undertaken writing for a living. It was actually working, providing me with an income of at least some stability, even as new as it was to me. I had never really considered myself a writer at all, frankly, but life brings us to some odd crossroads.

I had a small epiphany: Why don’t I go live there a while? I mean, I am mobile now. My market is in the ether.

I broached the subject out loud, looking for holes to punch into the theory, and we decided it was impossible to find many, provided I didn’t mind the trip ‘back in time’ – to Kentucky and my early life. Hell, that one was easy at the time – it was actually exciting. That night we booked my flight, I made the local arrangements, and the rest is history.

But this is current stuff. Mother’s story is more Prehistoric!  (She’ll kill me for that, lol.) If there are no further posts here in the future, look no further than her room for the perp.