Once again, I have to speak to the fact that “Mud moves me”.

Mud, in fact, has been such an outrageous truism of my work, the actual process involved in installing landscapes required an entirely new adaptive vocabulary.

We now speak of “Spackling” an area with the back sides of shovels on those areas which are too soft to actually walk on without leaving 6 inch deep mud prints – or worse, losing a boot. Spackling means beating the mud into the condition of smoothness that can eventually receive the back mulch or the turf/sod to be put on top of it. It is a completely necessary step.

We also sometimes grab plywood or pallets and walk on them en route to various duties, finding our overall terrain “spackled” simply by weight and a flat surface. 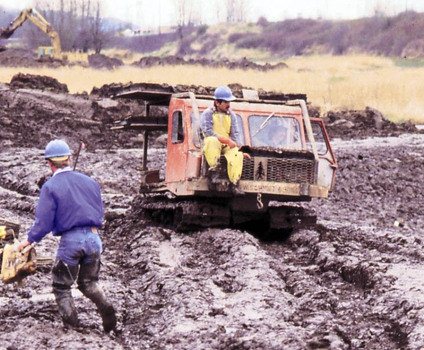 “Percolation” refers to water leaving the mud – obviously downwards. Where it will not “percolate” – where some natural or man-made structure prohibits draining – there we will see piping and methods of collection and disbursement. We would, for example, “spackle” an area of loose, rutted, slimy mud, walking backwards and working our way out, so that over time, it will “percolate” away and be quite solid after a short period of time.

Here is an excellent rendition of using plywood for grading and support at the same time. 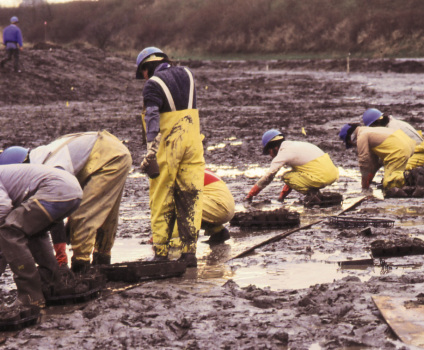 The down side of this is that we seldom have any of that precious commodity – Time. Thus, we are beset with yet deeper problems, having to work on top of this stuff and finish the project within the always-ticking periodic framework agreed to. The picture below is an innocent enough look at a project which was one of my 10 most incredible mud events. 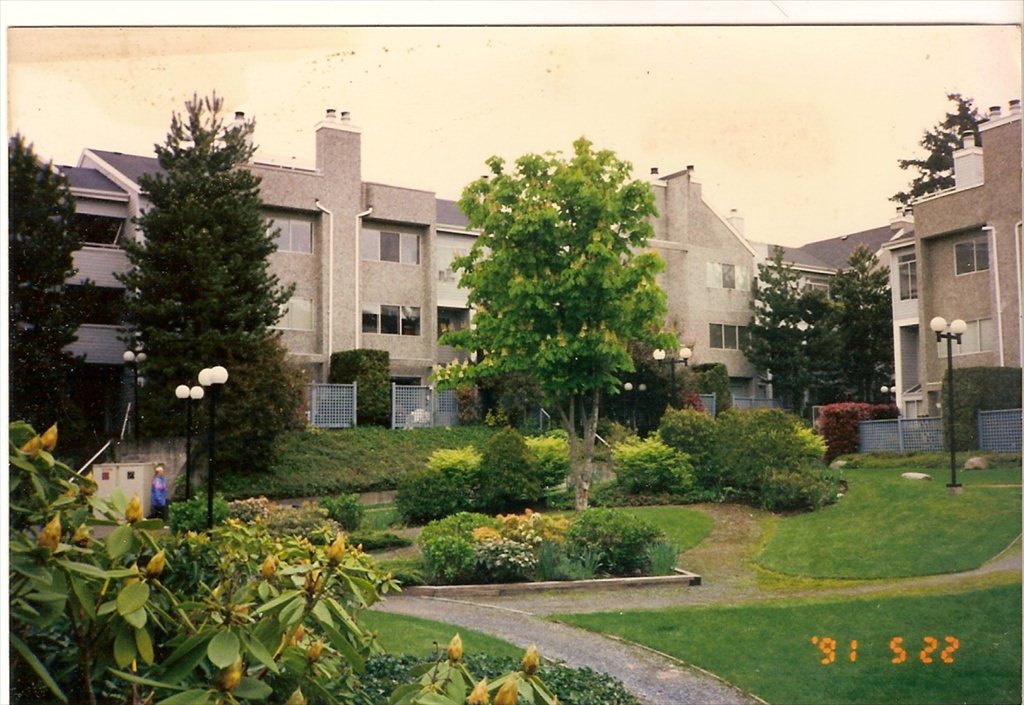 Looked at above, it seems straightforward enough. This picture is taken about 7 years after the actual installation and said installation was absurdly hard, made more so by an uncooperative supervisor – which happens.

The entire courtyard was completed except for the grassy area and walkways, at the time it became more problematic than normal. We had installed the big Catalpa Tree and all the plantings surrounding this courtyard quite successfully, adding terrific topsoil and plantings. What we were faced with was sodding. Following sod, we would then be able to install the borders for the limestone pathways and install the paths themselves.

Christmas was approaching. As the rain increased, daily – it was a hugely wet Winter – and the Holidays closed in, even acquiring the sod itself was facing problems. Meanwhile, the contractor was finishing everywhere except for where all “the dam mud” was. We decided we had to make a move, ordered up the sod from an initially reluctant but eventually quite happy supplier (income can be hard to come by just before Christmas).

The day began by receiving 16 pallets of sod – 8,000 square feet, more or less. Of course, even finding a place to stash all the sod was difficult because the outlying streets were narrow. Offloading the sod became as much a chore itself as the laying would prove to be as we found ourselves directing traffic and even dealing with police who fielded complaints.

Then it began snowing. 😉

I am reminded of a quote I once read by William Glasser and its relevance to our theme today redounds mightily in my little head, much as it did that day, when everything seemed so impossible and so ineffably hopeless:  “It is almost impossible for anyone, even the most ineffective among us, to continue to choose misery after becoming aware that it is a choice.”

My point? It will show up soon.

We had raided the local Juvenile Detention Facility – a minimum security place – of kids 16 or so who the powers there were looking to keep busy, preferably with hard work. Well, we had that.  🙂

They had asked if we could pay whatever minimal figure it was they wanted these boys to have – as I recall it was about $1.75 or so, lol.  There was no way we were going to pay that. In private, with these go-getters, we secretly mentioned we’d be paying them 5 times that but we needed them to work in impossible conditions and work real hard. I felt like Charlie Sheen – WINNING!!!  It was hilarious watching their eyes light up in this muddy conspiracy, which got even more out of control when we mentioned we’d be buying lunch as well from McDonalds. Man, some folks are just easy.

So there we were……….16 – 2 ton pallets of wet sod, heavier than a car with 4 of us and our 5 – 16 year old 135 pound kids, already wetter than hell in 34 degree weather. Intermittent rain and snow finally gave way to pure snow with flakes the size of Texas as the self-made tunes broke out like Christmas caroling in Hell. As I recall, I began the music part of the festival with some strictly Elvis Christmas work, and the boys sang with me at first, eventually bursting out into more serious tuneage as we slugged and mugged our way through the worst weather I have ever encountered during a landscape project.

Oh – I nearly forgot one small, teensy, weensy item. As we entered the site that morning, I stepped into what appeared to be a disturbed soil area and sank 3 feet in near-water. It was stunning – I was totally shocked at the appearance of “quicksand” in such an urban environment, and that’s a pretty monstrous understatement.  When I asked the supervisor what was up, he mentioned he had forgotten about running conduit and wiring for the electrically-fed lamp posts around the courtyard and that he had completed that process the prior day (we weren’t there) with a backhoe and some grumpy electricians.

What it did, of course, was make a circle – 2 feet wide and 3 feet deep – around the entire interior of the courtyard of the most thin mud imaginable. Stepping into it was to simply disappear, lol. What a day! Lordy, I got madder than I’d been in recent years – it was an incredible mistake on his part and what he was doing was asking me to work on, in spite of the ‘quicksand’. Of course, he was also asking me to bail him out, was the truth of the matter. When we realized this, it made the entire episode somehow more tolerable, so we, ahem………get this………..”Held our mud”. Ha! 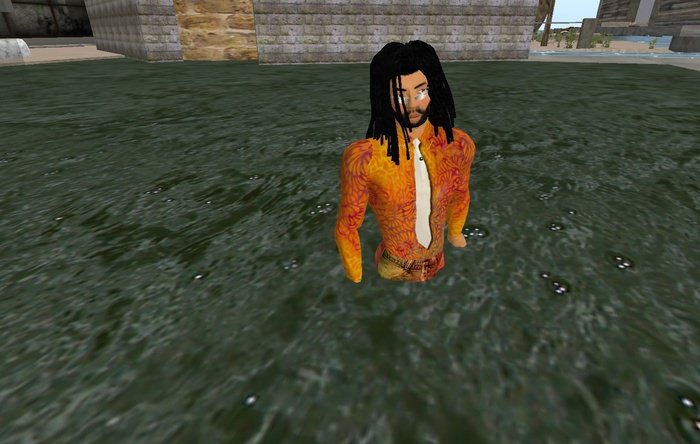 Off we go, sod in hand, a slurry of kids reeling under the weight of even just one clay-packed roll of sod, weighing in at least 40-50 pounds apiece and walking a moving bridge I supplied with strategically-placed plywood and, then, later, using the pallets we acquired as we exhausted the sod stacked on each. The famous Gene Kelly tune “Singing In The Rain” made an appearance, once the snow briefly stopped and the rain intensified, lol. It was total anarchy. Lunch consisted of wet people staying wet and shivering, then returning to the chore as fast as possible, simply to stay warm.

Finally the snow began coming in such an amazing heavy fall, and with these huge flakes, the place quieted down and it became almost cathedral-like in the silence and awesome weird sensuality amid the apparent impossibility of our quest. Our camaraderie was off the charts as we all – to a man, or boy – fought against currents devised to destroy motivation and energy. But we got even. We got better. As our relentlessness persisted, we began seeing green behind us, adapting ‘in situ” to the evolving problems of mud seeping through the spaces in pallets by moving them more often. The green behind us began expanding and that gorgeous space alone became a motivator of fabulous property.

Late in the day – and, yes, it was dark now – we finished. Our ten hours of effort paid off and we looked back on our accomplishment with a shared pride so rare I am not sure I’ve ever felt the likes again. My debt to the kids who joined us as well as to my normal crew showed me the depths of a gratitude that only a team working in such impossible conditions could provide. It felt like some sort of Medal Ceremony was in order.

And, by the way, it looked beautiful.

We finished the day and we finished the sod and by the time we were done, we saw 3 full inches of snow on the ground behind us with a covering settling in which would make that look small. We paid the kids their cash, had some good laughs and arranged for them to be back the next day for a huge clean-up and for some more work. Mario and I adored the guys – they were funner than fun.

The next day, the project supervisor who very purposefully missed the prior day showed up and his reaction was a total classic. To call it shocked would be a complete understatement. The soil supplier and the sod supplier both showed up as well as we had the kids undertake the “dreadful task” – ha ha! I’m a liar! – of cleaning the streets off with fire hoses from a hydrant.

“Steve, Good Lord, man, it’s a miracle! I can’t believe you did that!” Of course, this was the same guy who the day before said, “Shut up and get the dam job done.”

So there’s another good mud story.